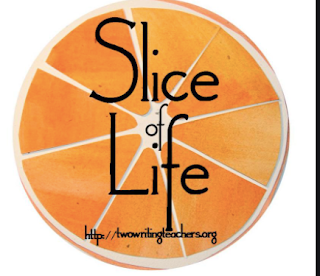 I have dabbled in Spanish for many years.

I started when I was in fifth grade.

Picked it up again in college.

Got a little more serious about twenty years ago when I started working in my school district, that has a large percentage of Spanish-speaking families.

And super serious when I went to work as a literacy coach at a dual language school ten years ago.

For the last three years, I have been taking classes at the Spanish Language Network. The classes are small, usually no more than eight people. The woman who owns the school is a former teacher, who not only knows a lot about teaching language, but also a lot about good teaching in general. The instructors she hires are really good.

My Spanish has improved a lot.

So two or three nights a week, at 4:30, 5:30, or 6:30, I switch from Google Meet where I teach all day to Zoom, where my Spanish classes are held. Most nights I just do an hour-long class. An hour is just about right for me, after I have taught all day.

Wednesday nights, though, are different. On Wednesdays, I do two, one-hour classes back to back. The first hour is reading and writing. The second hour is a conversation table, where we tell stories and watch videos and talk about them. I love the instructor. I love the classes. But the last half hour of the second class is really hard.

I'm tired. I've taught all day. And then I've listened and thought in my second language for 90 minutes, which takes a lot of mental energy for me. My mind wanders and I have to tell myself to focus, again and again.

Usually, during that time, I learn a lot about myself as a learner and as a teacher. Take last week,  for instance.

But it didn't go so well. The story was too long and too complicated, and I wasn't ready,  at all, when Austin announced that our five minutes of prep time was over. And then he called on me first. And I totally and completely blew it. The story didn't turn out funny, at all. I'm not sure anyone understood it. And I stammered around and messed up, again and again, and again.

Austin gives us feedback right afterward. And mine was as awful as I knew it would be. I had totally and completely screwed up the past tense verbs. He particularly focused on the word hacer, which means to do or to make. I hd used third person (he/she) instead of first person (I) all the way through. At our level, Austin told me, I should definitely know how to do that. Which I actually usually do.  But I didn't do it this time.

Afterwards, and even into the next day, I felt really discouraged and embarrassed by my performance. Maybe I will never be able to speak Spanish proficiently. Maybe I should even give up. Why had I even tried to tell that story? I'm the oldest person in the class, and now I'm the stupidest also.

I made a list of harsh consequences- things I definitely needed to do if I was going to keep speaking, e.g. do 30 minutes of Spanish drill online every day, write a conjugated verb, starting with hacer, ten times in a notebook, read thirty minutes a day in Spanish. I wanted to email the instructor and apologize, and explain what I thought had gone wrong- that I was tired, that I had bitten off more than I could chew, etc.

Now, a week later, I've kind of processed it, and forgiven myself, I'm ok.

I have been taking Spanish classes for a long time. The classes are helping me get better at Spanish, but they are also helping me get better at teaching my kiddos, who regularly suffer from lack of focus or the lure of the internet. And who often fail miserably at tasks they should be able to do. And sometimes take on challenges that are way bigger than they can handle by themselves, or in the amount of time I give them.

I hope I give them feedback that moves them forward, and helps them to try again, to envision their possibilities. But I'm not sure I always do that.

Learning Spanish has taught me a lot about teaching in English.

Teachers should always be learners of something a teeny bit hard for them.

Hi Carol. I really appreciated your honest and reflective post. It was courageous of you to examine the difficult incident in class. At first you were harsh on yourself, which I can totally relate to, but then you processed it and thought about it in terms of your own students. Learning is hard and we want as teachers to meet our students where they're at. I think you're doing that work, which is so important! Your students are lucky!

I love this reflective piece! Being in the student seat gives teachers such an opportunity to empathize with what students are going through. It relates to another post I just saw about the power of productive feedback. We can keep improving our practice with these kinds of experiences and reflection.

This slice offers so much insight for teachers. I found myself thinking about how you choose to engage in learning that is hard for you, even after long days. Most of the time, our kids don't have a choice; they can't opt out when they're tired or hungry or have just had enough. Your ability to empathize with learners in this situation, as well as your vulnerability in reflecting on this understanding with us is so powerful. How often do adults just tap out when we're tired and/or the learning gets too hard? My suspicion is way too often. It's a missed opportunity to really empathize with our students. Thank you for sharing!

Your slice took me back 40+ years ago when I was learning Cantonese. I wrote about the experience and commented that it was probably the first time I experienced failure in an academic setting. Teachers are often the students who feel most comfortable in the learning process. It was valuable for me to see how it felt to struggle at learning something. I love the observations you made about feedback to your own students. And it seems like Austin was a little harsh in his feedback. I hope you've put that list of consequences in the circular file. Life is challenging us enough right now. I'm totally impressed that you show up for classes on Zoom after a full day of teaching on Zoom. Give yourself grace.

Your wisdom teaches all of us. Be kind to ourselves, be kind to those we contact, be aware.
You rock, Carol.