THOUGHT FOR THE DAY

Labels: Thought for the day

WHY DO THE OHIO BLOGGERS GET TO HAVE ALL THE FUN?

OK, Colorado kids' lit bloggers! I just finished reading a post by the Ohio bloggers- they couldn't go to the conference in Portland, so they went out to breakfast, then went book shopping at their favorite kids book store. Doesn't that sound fun? I want us to try it! Anybody else?
Posted by Carol at 4:57 AM 4 comments: 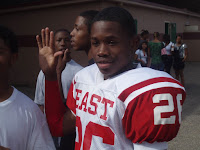 JOE SHERLOCK is another not new, but new-to-me series. Joe is a ten-year-old detective who charges his friends and neighbors $10 a day to solve their mysteries. Although Joe seems to get the job done, it's generally not without a few mishaps.
I read Case #00002, The Neighborhood Stink, this week during Reading Workshop. In this book,  Joe has been hired to discover which neighborhood dog is pooping on his neighbor, Mrs. Fefferman's, otherwise pristine lawn.  In one hilarious chapter, he is staking out the yard and sits in an ant pile. Of course he has to take his pants off right there. He runs across the street in his Captain Winkie Boxers; his two evil sisters think this is hilarious and lock him out of the house. Joe decides to crawl through the dog door, but gets stuck halfway, still clad in only his Captain Winkies.
The books are a little racier, and a little more Captain Underpants-ish than some of the typical series that are easily accessible to kids just breaking into chapter books. My fourth grade boys have devoured the first three and are begging me to make a trip to the bookstore to pick up more this weekend.
Posted by Carol at 10:34 PM 1 comment:

I'm on a constant lookout for funny, scary, gross, and amazing books-- you know, the ones that even the most tentative readers in the class are dying to pick up. I've just discovered SHOO, FLY GUY and it's ABSOLUTELY PERFECT!
Fly Guy is, you guessed it, a fly! He comes back from an outing one day to discover that his family and friends have gone on a  picnic! Fly Guy sets out looking for them, and for his favorite food- brown, oozy, lumpy, smelly Shoo Fly Pie. Along the way, he makes several stops-- on something that is brown (but not oozy or smelly), something that is oozy, (but not brown or smelly), etc. The book is gross, and funny, and a total hoot!
I'm thinking of the second, third, and fourth graders I know-- the kids who devour books about sharks, and dinosaurs, and skateboarding, and race cars, kids who want to take on the challenge of chapter books, and those whose JUST RIGHT  books in terms of what they can read comfortably are titles like HENRY AND MUDGE, and FROG AND TOAD. FLY GUY  is a  series for those kids!
And the best news yet-- this is a SERIES- there are four FLY GUY books!
* Disclaimer: This is not a brand new series-- just a "new to me, new favorite" series!
Posted by Carol at 4:20 AM 1 comment:

A MATTER OF PERSPECTIVE??

On Friday, I met with my fourth and fifth grade reading group. All of the kids in this group read about two years below grade level (whatever that means!). I'm reading aloud one of my favorite new read alouds, HOW TO STEAL A DOG. I chose this book for lots of reasons--
1)  I love it and couldn't wait to share it with kids
2) Georgina, the main character, has a life very similar to many of my students
3) It focuses on tough issues and could promote lots of great conversations.
We definitely had one of those conversations on Friday. We're about a third of the way through the book, and as I finish the chapter, D'Anthony, one of my fourth graders, says, "So they're not that poor?"
I'm surprised at this comment. I would say that Georgina and her family, homeless and living in their car, are very poor, but if I've learned anything in my 25 years of teaching, I've learned that there is usually logic, and often wisdom, behind kids' comments.
"What do you mean, D'Anthony?" I query.
"Well, they are kind of poor," says D'Anthony, "because they have to live in their car. They are not that poor, though, because they can buy coffee and M and M's."
I'm still surprised. I ask the other kids what they think, is Georgina's family "totally poor" or just "kinda poor."
Rodolfo thinks they are kinda poor. "If they were totally poor," he says, "they would not even have a car."
Jackie, oldest of five kids, also thinks the family is only kinda poor, "Because they don't have to live outside, and because they have food to eat."
Darlene and Tyree concur with the other members of their group.
I am blown away. How can a family living in their car be only "kinda poor?"
I suspect these kids have known days of "totally poor" and I am struck dumb by the lack of gratefulness at the abundance in my own life. I hope that the next month when things are tight, I remember that it's all a matter of perspective. Even in those times when I feel kinda poor, I still have a roof over my head, food, clothes to wear, and a car to drive. I can still buy M and M's and an occasional cup of coffee, not to mention a million other material blessings.
Actually I am very, very rich. It's all a matter of perspective.

Labels: book response, How to steal a dog 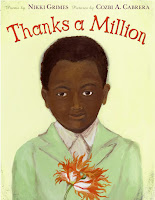 I've been thinking a lot this year about the power books can have in kids' lives. Yesterday, Cynthia's Lord's blog made me cry (read the last item, about her visit to a school earlier this week).
This year, I moved to a new school. And the kids' lives are really, really hard. Most of our kids are very, very poor. They come to school in shoes that have soles that flap, and without jackets on chilly fall mornings. They eat yucky cafeteria food for breakfast and lunch and ask for seconds, because they don't know whether there will be dinner at home. Every Friday, and especially at the end of the month, kids tell us they are going to a new school on Monday. At least once a week, a child tells a story that makes me feel like I have been punched in the gut, hard.
I want my kids to know that they are not alone, that even though their lives are hard, they will survive, other people have walked through this too, and that they will be ok. One of the best ways I know to do that, is to share amazing books about people that have survived hard things. Right now, I am reading HOW TO STEAL A DOG  to my fourth and fifth graders. They love this book, mostly, I think, because Georgina, the main character, whose family is living in their car, has a life so much like their own.
This week, I ran across this poem, "Dear Author," in THANKS A MILLION by Nikki Grimes (Greenwillow Books, 2006). The book is a collection of "gratitude poems," a book I bought to help me remember to give thanks all year round.
"Dear Author"
Nikki Grimes
Dear Author,
When my father died last year,
Somebody threw a switch and turned me off.
I couldn't breathe. Or cry.
My family wondered why.
Months passed, and they figured
I must be ok. But they were wrong.
I leaked sadness everywhere I went.
No one seemed to notice or undersatand.
Until Lotus, the girl in your last book.
She was also drowning deep inside.
Some nights, I'd crawl between the pages
of that novel and hide for hours.

The two of you made all the difference.
I just thought you'd want to know.
Sincerely,
Grateful
Poetry Friday this week is at Biblio File.
Posted by Carol at 4:44 AM 2 comments:

Hurray!  Duck is back!
It's time for the annual Corn Maze Festival. Farmer Brown has big plans  to build a Statue of Liberty corn maze, and has enlisted the help of all of his animal friends to complete this project. The chickens are building the fence around the corn maze. The cows are painting the barn. Only Duck is less than eager to help, and has to be threatened with the loss of his special-order organic duck food, if he doesn't help.
As always, though, there is a twist. Each day, Farmer Brown sketches, measures, graphs, and mows. Each night, Duck, with the help of night-vision glasses and a glow-in-the-dark ruler sketches, measures, graphs, and mows. The end results are hilarious.
I bought THUMP, QUACK, MOO this afternoon, and read it to my boys at the dinner table tonight. My boys have absolutely no doubt that their mother is a total nerd, but secretly, they loved Duck's newest adventure!
Posted by Carol at 9:08 PM 1 comment: 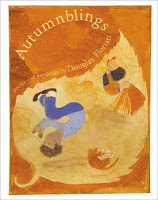 AUTUMNBLINGS by Douglas Florian
This is not a new book (it was published in 2003), but it's a new to me book, and it's just really, really lovely, perfect for this time of year, when there is just the beginning hint of fall crispness in the air, and the parks are dotted with football teams.
The poems in AUTUMNBLINGS are mostly short, simple, and really clever snapshots of the season. Older kids will enjoy Florian's word play; on almost every other page, readers encounter words like hi-bear-nation, owlphabet, and tree-son. Many of the poems are list poems, and after I shared the book, with a third grade class, eight-year-old Kaelan took it upon himself to let us know how he feels about being back in school:
"What I Love About Summer"
Swimming,
No school,
Play all day
Stay up all day and night,
Hot!
I love summer.
Kaelan
Then, just like Florian, he turned it around:
"Why I Hate Fall/Autumn
School in,
Homework,
Going to bed early,
Have to go to school
every day,
ALL day long,
I can't wait until summer!
I may have to buy this book! And I am definitely going to check out WINTEREYES and SUMMERSAULTS!
Posted by Carol at 8:08 PM 1 comment:

Lessons from a Beer Goddess