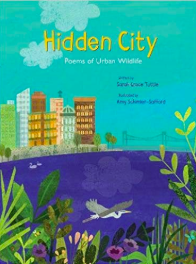 I live in the heart of Denver. Although I live at least 30 minutes from any area I would describe as "wooded or rural," I regularly glimpse raccoons, foxes, coyotes, and of course, squirrels, and all kinds of bugs and birds, when I am out working in the yard or walking my dog.

In HIDDEN CITY: POEMS OF URBAN WILDLIFE debut poet, Sarah Grace Tuttle celebrates the wildlife of the city. In her poems, readers find all kinds of animals- including mice, skunks, sparrows, and several kinds of insects, as well as plants like mushrooms, moss, and wildflowers.

Tuttle has a dual degree in English and environmental studies, and as someone who loves a few facts with her poetry, I love the information she embedded in each poem, as well as the followup endnotes, "Fun Facts About the Wildlife in These Poems."

Readers of HIDDEN CITY learn to watch carefully for the natural wonders in their own world. I could see reading the poems and then heading out with writers' notebooks to capture the wonders that we might find. Kids could definitely use the poems as mentors for their own wildlife/nature poems.

Artist Amy Schimler-Safford is an illustrator that is new to me, but her collage artwork is perfect for the poems in HIDDEN CITY.

"Community Garden"
An empty lot has
grown over with
wild tangles of grass and aster,
bright dandelions,
wood sorrel, clover.
Now
bees and butterflies feast on nectar
ants build
snails crawl
and garden snakes sun themselves
by the graffitied wall.


"Under Cover"
On the side of a house
ladybugs
tuck under shingles
in clumps and rows,
crawl into cracks
in clusters and droves
slow
slow
slow
their heartbeats,
and snuggle in tight
for their long winter sleep.


"The Hunting Lesson"
A mother raccoon
teaches her kits:
place paws firmly and
push
push again
push again
until
CRASH!
a feast spills out of the bin.
Bagels and fish heads and broccoli
all for the taking.

I'm looking forward to sharing this book with students in my urban setting.
Posted by Carol at 8:51 AM 1 comment: 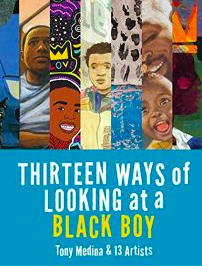 Brenda, at Friendly Fairy Tales, is hosting Poetry Friday today.
Posted by Carol at 5:41 AM 10 comments: 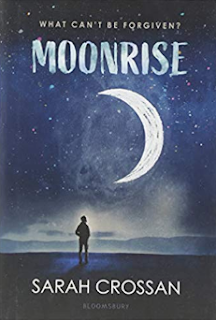 Joe Moon is seventeen years old.
He hasn't seen his brother, Ed,
since he was seven,
when Ed stole his aunt's car
and hotfooted it to Texas.

Joe remembers
taking a phone call from Ed.
There was an incident
a policeman was shot and killed
And Ed
despite proclaiming his innocence
ended up on death row.

Now, ten years later, Ed's execution is imminent,
and Joe travels to Texas
to see his brother,
and possibly to say goodbye.

A powerful (and horribly sad) story
of family
and love
and justice (or injustice).
Posted by Carol at 4:48 AM No comments:

WITH MY HANDS by Amy Ludwig Vanderwater 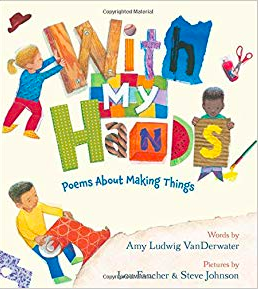 Can't believe it's been a month since I have blogged! I have had rough spells, but I am pretty sure this is a record for me. Can I blame the beginning of the school year and 67 sixth graders??? Anyway, I'm back at it now. I'm a CYBILS poetry judge, so from now until the end of December, you can expect a whole lot of poetry books and novels in verse.

Amy Ludwig VanDerwater's WITH MY HANDS: POEMS ABOUT MAKING THINGS is up first. The book, which debuted in March, begins with the poem, "Maker."

I am making
something new
with my hands
my head
my heart.

That's what makers do.

A maker starts with
empty space
ideas
hopes
and stuff.

A maker
pushes
through mistakes.
A maker
must be tough.

A maker is a tinkerer.
A maker
will explore.

A maker
creates something new
that
never
was before.

WITH MY HANDS goes on to celebrate the joy of creating. There are poems for artists, for builders, for bakers, for sewers, actually twenty different poems about things to do or make - painting, clay, birdhouses, snowflakes, piñatas, parachutes, boats, cards, knot, soap carving, tie-dye, collage, spaceship, sock puppet, cookies, leaf pictures, a fort, origami,  knitting, a shadow show.

I had a hard time choosing poems to highlight. A couple that I loved:

"Tie-Dye Shirt"
I made a tie dye.
Didn't buy it.
Twisted
Tied it
Dipped it.
Dyed it.
Rinsed.
Untied it.
Shook it.
Dried it.
Wore it.


"Parachute"
I cut a parachute from plastic
tied my guy on with elastic
threw him from a window (drastic)
watched him drift to earth-- fantastic!

"Cookies"
You're not even looking
but you know
we have been cooking
for we're filling
up the kitchen
with a smell
of something good.
We are stirring
hands aflutter
mixer whirring
eggs and butter.
We resemble
clouds of flour
(as two
busy bakers should).
And these goodies
we are making
were a batter.
Now they're baking
into cookies.
Will you help us
eat them up?

We knew you would.

Should I admit this book made me a little nostalgic? When I was a little girl, I was constantly making something-- water color paintings, bean pictures, clothes for my dolls, a carnival.  My boys were always digging, building, cutting, drawing, baking.

I don't see kids doing as much of that anymore and it makes me sad. I envision this book opening up whole new worlds-- I hope it would cause kids to say, "Could I really make/do that?" I envision myself putting this book at a center in an elementary grade classroom, along with all kinds of "making" materials. I also think it would be a terrific Christmas gift- along with a box of things to use for making- yarn, googly eyes, markers, construction paper, beads, etc.

Thanks, Amy, for another terrific offering to the world of children's poetry!
Posted by Carol at 5:55 AM 1 comment: