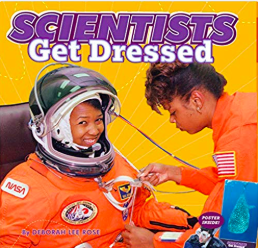 A book I think lots of kids are going to enjoy!
Posted by Carol at 5:16 AM No comments: 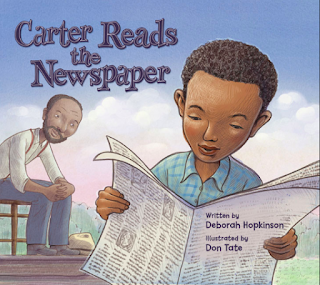 As a long time urban educator and as the mom of two African American sons, I think I have a fairly extensive knowledge (not to mention a library) of famous African Americans. Nevertheless, this week I learned about a person that was totally new to me when I read CARTER READS THE NEWSPAPER.

Carter Woodson was born on a small farm in Virginia in 1875. His father was a former slave and solder in the Union Army. His mother had vivid childhood memories of standing on the auction block. The pair struggled to support their family of seven, and Carter only went to school four months out of every year, because he had to work on the family farm the rest of the year. Carter began his scholarly career reading the newspaper to his father.

At age 16, Carter followed an older brother into the coal mines. One of the coal miners opened his home to the miners every night. When the men discovered Carter could read, he was again pressed into service. At age twenty, Carter finally returned to high school. He graduated in two years, then went on to college, eventually earning a Ph.D from Harvard. When a professor stated that the Blacks had no history, Carter was determined to prove him wrong. He dedicated the rest of his life to proving that, establishing Negro History Week, which later became Black History Month,  in 1926.

Deborah Hopkinson is one of my favorite storytellers and Don Tate's artwork definitely enhances the story. During the first pass, I read for story, but during the second, I noticed how Tate had worked drawings of more than fifty famous African Americans into the illustrations.

End pages include "Learn More about Carter G. Woodson" as well as an author's and illustrator's note.
Posted by Carol at 6:31 AM No comments: