I thought about Poetry Friday a couple of days ago. And then this happened about ten miles from where I live today. And about six hundred families have lost their homes. And in between tracking down people I love, and seeing if any of Rooney's buddies might need shelter. I just kind of forgot. Leave your posts in the comments and I will round up in the morning. 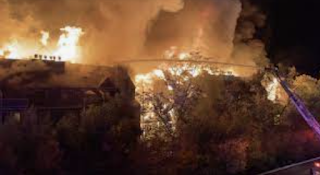 An update on the fire- We have had about six inches of snow since yesterday afternoon, our first snow in over two hundred days. It's also bitterly cold. Right now, I’m absolutely heartbroken thinking not only about the 600+ families that have lost homes, but somehow, the thing that is bothering the most is the animals. Some pets have been confirmed dead, however, some are believed to be alive, and wandering the neighborhoods around the fires. People aren’t being given much access yet to the fire area, but some have managed to build little shelters, in case their pets happen to come home. Thinking about all of those poor animals, looking for their people, out in the cold, makes me so, so sad. Amy Ludwig Vanderwater’s poem about building forts for pets was written with an entirely different intent and context, but even so, it  made me cry.

In the spirit of collabellation (according to Heidi Mordhorst) and/or tintinnabulation (Carol Varsalona, The Poetry Sisters and, I think, a few friends, are writing about bells this month:

"And now let us believe in a long year that is given to us, new, untouched, full of things that have never been, full of work that has never been done, full of tasks, claims, and demands; and let us see that we learn to take it without letting fall too much of what it has to bestow upon those who demand of it necessary, serious, and great things." 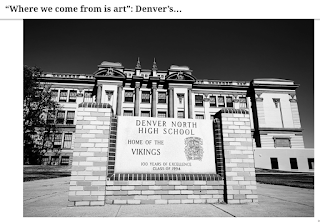 I haven't posted much recently. Ok, actually I haven't opened up my blog in six months. However, it looks like possibly I am going to have a little more time in my life, so maybe I will dabble in poetry again. Today, I'm stopping in to make you aware of a new poetry book published by students at North High School, which is the feeder school where many of my students attend.

I teach in North Denver. When I started working there, ten years ago, the neighborhood was like many others I had worked in before-- working class families crowded into tiny houses, some more than one hundred years. At least once a month, someone would get evicted and we would watch as the neighbors dug through possessions piled on the front lawn. For several years, we watched as one little house slid, inches at a time, off its foundation until finally it was condemned. The school where I taught was about 95% free and reduced lunch.

That has all changed in the past decade. About twenty years ago, they built Coors Field, the stadium where the Colorado Rockies play, about a mile away across the highway from where I teach. The neighborhood around the stadium changed rapidly, from a land of factories and railroad tracks to upscale lofts and restaurants. LoDo/Rhino, as it was called, became a hipster neighborhood where everyone wanted to live.

When the developers ran out of room, they went across the highway, into the neighborhood where my school is located, tore down all of the little houses, and built what I call saltine-cracker structures. I call them that because of their shape- tall and narrow, like a saltine-cracker box standing on one end. The roofs are flat, with patios or decks that are advertised as having a city view. Most of the structures are duplexes, which sell for upwards of $800,000 apiece. People can walk or bike across the 20th Street Overpass into downtown.

Sadly, the families who lived in that area, many of them for generations, can no longer afford housing in their own neighborhood. They've been pushed north ten miles to Federal Heights or east to Aurora. Enrollment at my school has dropped dramatically. I doubt that we will even be open in another five or so years-- the people who currently  live in the neighborhood don't, as a general rule, even have children.

Recently, students at the local high school, created a poetry book around the gentrification of our neighborhood. Each student in a Latinx Leadership Class was asked to take a picture of the neighborhood and write a poem to go with it. Their work, our sacred community, is stunning. 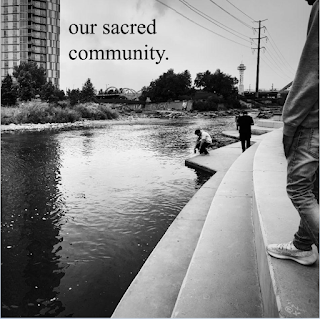 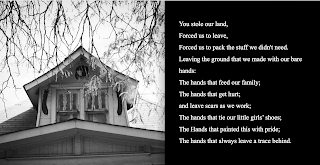 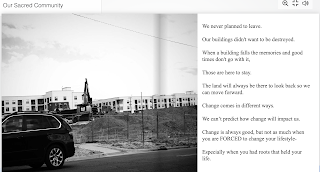 You can read the whole book here.

It was also featured in The Denver Post last weekend.

And in an article on the local news.

Check it out. These kids have something to say. 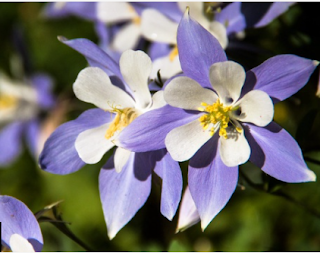 "Columbine Flowers" by wcurrierphoto is licensed under CC BY-NC-ND 2.0

Welcome to Colorado! I'm excited to introduce you to Jeannette Encinias, a new-to-me poet, whose glorious, richly detailed sensory images, remind me more than a little of one of my all-time favorite poets, Mary Oliver. Jeannette lives in the Pacific Northwest and has a book, Queen Owl Wings, coming out in November. I discovered Jeannette when a friend posted "Beneath the Sweater and the Skin" on Facebook earlier this week. This morning, when I was thinking about what I might post, I immediately thought of Jeannette's poem. I emailed to ask if it would be ok to share her work and link to her website, and she very graciously responded, within an hour. So here, without further ado, is my absolute favorite new-to-me poet!

"Beneath the Sweater and the Skin"

How many years of beauty do I have left?

How many more do you want?

When you are 80 years old

and your beauty rises in ways

your cells cannot even imagine now

and your wild bones grow luminous and

ripe, having carried the weight

of a passionate life.

I went hunting on her website and discovered nine more poems. It was hard to choose only one, but I finally did. You will probably want to go to her site and read the rest though, because they really are lovely.

I worry seriously
about only a handful of things.
Eyes to the ground
furrowed brow
beating heart
sleep.
Then I remember
that I am here right now.
Here-
with good work and a big, bright love.
With a dog who just had a bath
after running in the mud
(Read the rest of this gorgeous poem here).
Jeannette Encinias
And now, include your link in the comments below and I will round them up!
************
Thursday Night Posters
************
FRIDAY MORNING FRIENDS

Mary Lee, the ever-faithful tender of Poetry Friday, has posted the new Poetry Friday Host Sign-up calendar. Be sure to stop over and choose a date.

Thanks so much for posting all of these lovely poetic offerings this week! I feel like the Universe is speaking to me about being more alert and more present in my life! OK, OK, I get it!!!
Be sure to stop by Mary Lee's blog to sign up to host Poetry Friday!
Posted by Carol at 4:02 PM 41 comments: 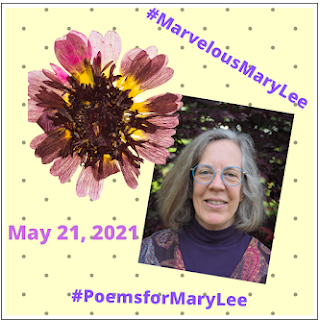 This week, I'm joining Christie (Happy Birthday!)
and a whole bunch of Poetry Friday friends,
celebrating the career of my dear friend,
Teacher and Poet Extraordinaire,
Mary Lee Hahn.
Earlier this week, a good friend gave me Linda Sue Park's terrific new book,THE ONE THING YOU'D SAVE. It's a short novel in verse. Each poem is a sijo, a three-line Korean poem, with thirteen to seventeen syllables per line. THE ONE THING YOU'D SAVE starts out:

“Imagine that your home is on fire. You're allowed to save one thing.

Your family and pets are safe, so don’t worry about them.

Your Most Important Thing. Any size. A grand piano? Fine.”

I used THE ONE THING YOU'D SAVE as inspiration for my #MarvelousMaryLee poem.

Another million life preservers, tossed to a woman drowning.

Those first emails, when I was trying to start a blog and boldly

contacted the only blogger I knew, repeatedly, to ask stupid questions,

And I would take the introductions to a zillion opportunities--

The red velvet cupcakes carried in a shoebox from Burlington

consumed in minutes by my football-loving high school sons.

A decade later my oldest still asks when Mary Lee will visit again.

And I would take the memories from walks at the Botanic Gardens,

I watched as she changed lenses, leaned in, marveled,

drew extraordinary from what had been previously only ordinary.

I would take the CD of hopeful songs

I would take pieces because I played the CD so many times, it broke.

and we all sat around, roasting marshmallows at her poetry bonfire.

I would take my frantic pandemic emails, sent last March

to the most famous teacher I know, when I was feeling totally lost.

And I would take retirement ideas. Start thinking now, Carol.

Do the things you love. Plan new chapters. Dream big.

And so I have Rooney. Write poetry. Imagine art classes.