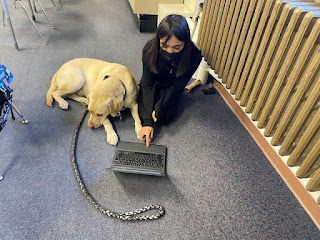 The call came on Monday.

My sweet Rooney is moving on up.

The trainers at Canine Partners have decided Rooney, the service puppy that has lived with me for the last two years, is ready for advanced training. Beginning next week, he will spend two days a week at Canine Partners, learning how to be a service dog. He'll learn how to walk next to a wheelchair, use the accessibility buttons to open doors, get things out of the refrigerator or washing machine, among other things. All the while, the trainers will be watching him to identify his strengths. They'll decide what role would be the best fit for him. Maybe he will be a mobility dog, supporting someone who has been injured in an accident or has severe arthritis. He could also end up supporting someone with autism. If none of those are the right fit, he could end staying with me permanently, and perhaps certifying as a facility dog.

And if I'm really honest, I have mixed emotions. On one hand, we've spent almost two years working toward this goal. Last summer, Rooney took an initial evaluation. One part of the test requires the dogs to wait (stay) until the trainer moves across the room, then come when called. Oh, and there is a toy between the dog and the trainer. Rooney failed that part of the exam. Badly. He did the wait part ok, but then on the recall, he picked up the toy. And then decided it was a good time for a game of keep away, so he raced around the room with the toy. Dune, another dog about Rooney's age, went on to advanced training. Rooney stayed in the intermediate class.  We kept working, and he matured a little, actually quite a bit. Two weeks ago, after he totally aced a really tough exercise, Angela, the head trainer, said, "I want that dog." Finally, Rooney is ready

On the other hand, Rooney is a big part of the culture in my classroom. He always seems to know who needs him. When K comes in after a difficult morning at home, which happens frequently, Rooney stops whatever he is doing to go across the room, and nudge K's hand. And when K needs a break, Rooney is more than happy to walk up and down the hall.  D, my little guy with Asperger's, regularly takes out his frustrations with a vigorous game of tug of war. S, whose family will be homeless this weekend, unless they find a house or apartment they can afford, sits with Rooney in his bed, stroking his head for hours on end.  The kids love him. We are on hybrid, and my Wednesday/Friday class is heartbroken that he won't be there with them anymore. I'm hoping we can go back to full time after Spring Break, so they will get some Rooney time.

So Rooney is moving up. And soon he will move out.

And it's kind of hard to think about life without my sweet guy. 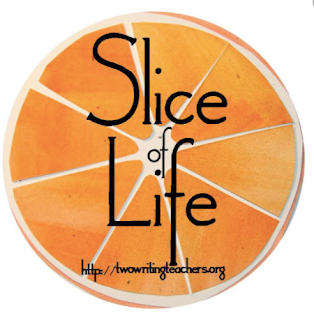 Your slice is beautifully written. What an experience you have given to so many students. Just think of the difference all of you have made for a person you all don't know!

How bittersweet that your boy is moving on up. Goodbyes are hard to say. Your pup has been a positive influence for your students so I imagine it is extra hard to say good bye. He will greatly improve the life of someone that needs a service dog. You played an important part of his development.

What a bag of mixed emotions. I'll be thinking of you and Rooney next week. And your students who'll be missing him too.

Oh, this seems like it would be the hardest part of raising a service dog! How wonderful that he's ready--and also how sad!