Slice #2- In Which I Become the Victim of a Vandal

In the past three or four months, I have been the victim of repeated acts of vandalism.

The vandal started by severing the cord on the crockpot, which was stored in the pantry under the stairs. And then there was the zipper on my good dress boot. Followed by a badly mangled Apple Computer cord. And then there was my favorite pair of dress boots. And one of the handles on my teacher bag. The corner of my journal.

Almost every event has resulted in property loss ranging from $25 to $100.

And those are only the large items. There have also been a number of smaller ones. The vandal loves to read, but he doesn’t take very good care of books. He regularly pulls the laces out of my tennis shoes and snow boots. He’ll go to any length to reach a magic marker. Sharpies are his favorite, followed closely by Mr. Sketch, which I special order to make charts for school. He loves cardboard and paper towels.

I know who the vandal is. I have caught him in the act more than once. He’s spent time behind bars, or at least in a kennel, but nothing seems to deter Galaxy, the newest addition to our family. Galaxy is a five month old collie/German Shepherd mix that joined our family in November, after our 14-year-old lab, Star, passed away.

He’s cute and cuddly, frisky and funny, sneaky and sharp-toothed,  bouncy, and oh, so very busy.

I’m hoping he will have me trained pretty soon, because man, oh man, his chew toys are definitely not cheap! 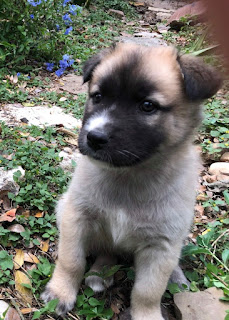 Carol, I loved your slice. At first, I thought you were victimized by a serious predator but as I read, your dropped clues. Then, I realized the vandal is your adorable dog. Got to keep your humor up.

Oh my goodness, that vandal is a precious fluff ball. You are in for an adventure with that rascal - have fun!

OH. MY. GRACIOUS! He's so precious! I am a huge dog lover and am falling over with adorable overload ... I would forgive everything, but, yeah, Galaxy's gotta learn.

Sneaky and sharp-toothed. I must focus on those details in your description because otherwise Galaxy’s charm might lead me down a bad path. Congratulations to Galaxy, he’s a lucky boi to have found you.

Ha! When I read your title, I thought, "Poor, Carol." The first sentences kept me in that same space. I laughed out loud when I realized who the vandal was. Good luck! I have a feeling your vandal will be persistent.

Galaxy!!!! Look at him!!! (And oh, the sweetness of naming him Galaxy after the loss of Star.) Oh, I hope there will be many puppy posts this month. I don't know if I will ever want the work of having a dog again, but I do love reading about them and living vicariously!