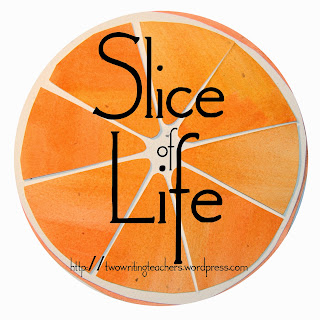 Usually I feel a huge sense of elation.

Writing thirty one days in a row is a huge accomplishment.

This year, not so much.

This year was not nearly as much fun for me.

I think there are several reasons for that.

Also, I think it's about community. For years, I felt like I had a really solid slicing community. We responded to each other's slices pretty much every week, and throughout the month of March. The last couple of years, many of my slicing buddies have dropped out. I really miss that community. I do have a community-- Ramona, Tamara, Elisabeth-- but it's smaller, and just not quite the same.

Along with community, I think it's about feedback. It's fun to get comments. And not fun when you don't. When I slice, I write because I have something I want to say to the world. I want to know that people have heard me. Many days, I only got one or two comments, never more than four or five. And it wasn't because I didn't comment on other people's writing- I always commented on at least ten people's slices, and usually more. People read my slices-- I think the average was about thirty viewings, but they didn't comment. And that made me a little sad.

So this year is over. And I'm glad to have sliced for 31 days. But I'm also glad it's over.

On to April Poetry Month.
Posted by Carol at 6:17 PM

Hi Carol - Your slice rang true for me, too. I didn't manage to slice all 31 days, and I'm ok with that. I think the challenge has SO many people and commenting is way down. Thanks for sharing your thoughts!

I read your slice every day, first thing after feeding the cats and stretching. I loved every single one. You made my days and you inspired me in so many ways. I am going to try to do #NPM19 because you made it seem possible.
Thank you!
Jean

Carol, I'm sorry it's over, maybe because I skipped a whole week this year? Thankfully I'll be able to use that little bit in reserve to get my students going for classroom SOL on KidBlogs. Does your class participate?

What hasn't changed is that I love reading your posts every day during March--and whenever else you post throughout the rest of the year. I am guilty of not always commenting. When I don't comment it's usually because I'm still thinking about what you wrote. I'm a slow processor and it takes me a while to put my thoughts into words. Thanks to SOL, it is getting easier. Thanks to this post I will keep in mind that it makes folks sad when they have lots of views without comments. Although I'd felt a twinge of that myself, it didn't sink in until you mentioned it.

Thanks for all of your thoughtful comments on my posts this month. I appreciated every one.

Carol, I think the lack of commenting comes from the group being so large. I think it's time for SOL to create pods or smaller groups of writers so that we can be responsive to a certain group of people. It could be a mix of ages, years in SOL, grade levels, etc. Many have commented about the lack of comments this year. I commented lots since I'm retired, but also had days with few comments. I did miss familiar faces this year, Linda, Elsie, and of course, Ruth (whose words we've missed for awhile). I'm glad to be part of your community and still hoping we get to meet F2F one of these days. Happy Poetry Month!

Your slices are probably my favorites to read. I know exactly what I want you to do when you retire: write books! You have so many chapters here already. I have wondered about the lack of comments I see on many blogs and not sure what to ascribe that too. I have seen several slicers say they cannot easily comment using their phones on certain blog platforms. I wonder if there is something technical getting in the way? I like Ramona's idea of smaller pods for SOL. I got off track commenting a couple of times this month and then had to do some comment flurries to catch up. The stories that haven't been written, can't be told yet, do weigh heavily sometimes.