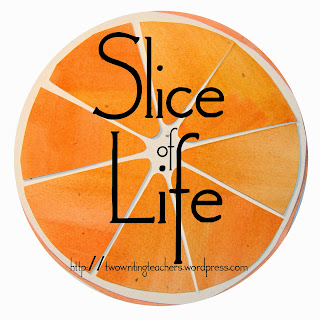 E's been coming for tutoring for about a week.

Ever since his mother discovered he had an F in my class. Mostly because he likes to sit in the back of the class and draw when everyone else is writing.

I've actually been tutoring another little guy for about a month. So now there are two of them. We work on literacy, mostly writing, usually for 30-45 minutes. Then J's mom comes to get him. E usually stays. And stays. And stays. Often his mom doesn't come for another hour.

Truthfully, I don't mind. I'm usually there anyway, and he's really easy to have around. Mostly he just draws. Sometimes he looks at You Tube videos. Tonight he decided he would do some math homework on a website our kids sometimes use.

He hadn't been working long before he asked if I knew how to do math.

He turned his computer so I could see the screen. He was dividing fractions. Something I actually do remember how to do. I grabbed a piece of scratch paper and sat down next to him. Talked my way through a few problems as he watched. Handed the scratch paper to him. Coached him through a few more problems.

And then he was ready to work on his own.

He called me back one more time. He thought was doing the problems right, but the computer program kept saying he was wrong. It turned out that he actually was doing the math right, but was using the lowercase l instead of a slash to write fractions, so the computer was counting them wrong. A minor adjustment and he was on his way again.

He worked for a solid hour.

And as E worked, I thought about how quickly he had moved toward independence. And how different he is, and how much less successful, in writing. And I wondered how I might make writing more like math. I already provide mentor texts. I write in front of, and next to the kids every day. I give lots of feedback. I give lots and lots of feedback. I try hard to be really clear and explicit. I celebrate successes pretty much every day.

Isn't wonderful to have a key open your thinking on a student? I think you found something today and should rejoice it.

"Sometimes" is the best possible answer to the question, "Can you do math?" It seems that all of the steps you took to unlock math for him are the same steps you take to unlock writing... I, too, wonder about the key.