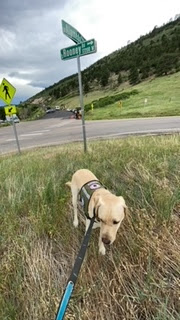 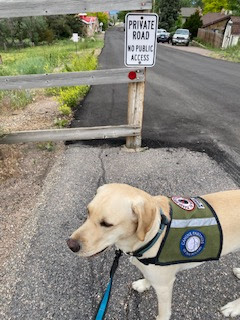 Rooney at Rooney Ranch, Summer, 2020 (it's privately owned, so you can't go onto the property)
For National Poetry Month, I'm writing a series, "Raising Rooney," in honor of the service dog I have been raising for the last two years. Today's poem is a "found poem" from the Colorado Encyclopedia about Rooney's name.

"CaPR's Rooney of the Rockies"

We named you Rooney,

Actually CaPR's Rooney of the Rockies.

You are named after Alexander Rooney,

seeking his fortune in gold

In a grassy valley,

and a long hogback

because the footprints of lots of big critters,

have been found there.

Rooney and his wife Emeline

regularly interacted with the Ute Indians,

who had been meeting on the land for hundreds of years,

bred Morgan horses for the US Calvary and British Army

continuously owned by one family

The ranch is smaller now

But the stone farmhouse still stands

and there are still cattle.

And now there is a four-legged descendant,

CAPR'S Rooney of the Rockies. 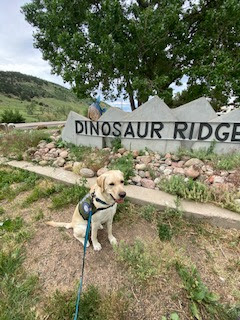 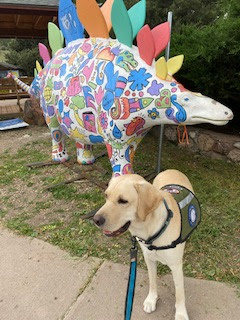 Love this history I didn't know, Carol. Rooney must be proud to carry it on!

Loved learning the story of Rooney's name and seeing him pose beside a dinosaur.

Canine Rooney does his name proud.