SLICE OF LIFE #27-A Book to Grow Hearts 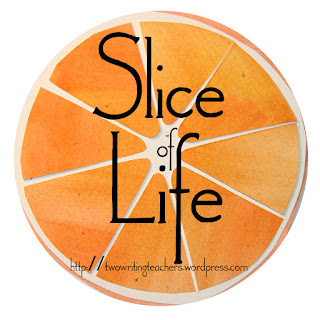 The kids at my school have been a mess since November. They are terrified. Many have family members that have gone back to Mexico, or that are living in fear of being deported. Kids regularly tell me that they are afraid they will go home from school, and that their families will be gone.

This is where the power of books becomes real to me. I read, a lot, because I love words and because I love stories. However, I also read because reading reminds me that I am not alone. Reading exposes me to people that are brave and stand up for others and do the right thing. Reading helps me to be the person that I want to be.

I work really hard to expose kids to books that teach them those important life lessons. I read aloud lots of biographies, historical fiction, and narrative nonfiction. I came across one of those books last week and shared it with my intermediate graders and middle schoolers at my school. 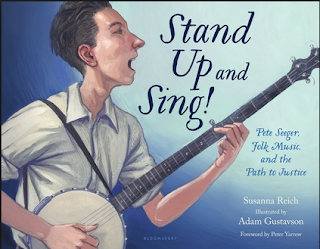 STAND UP AND SING: PETE SEEGER, FOLK MUSIC, AND THE PATH TO JUSTICE is a terrific new picture book biography by Susanna Reich. Reich follows Seeger from the beginning of his life to the end- his adolescent interest in Native Americans, how he learned to play the banjo, the difficulties of the Great Depression, playing his banjo at union meetings and strikes, meeting Woody Guthrie, getting married, being blacklisted, working with Martin Luther King, Jr., protesting the Vietnam War, and finally, building the Clearwater.

I loved this book, mostly because of the life lessons kids can learn from Pete Seeger.

• Pete Seeger teaches kids to use the talents they have been given.

• Pete Seeger teaches kids about taking care of others.


"He read about Native Americans and loved the idea that in some tribes, everything was shared. 'I decided that was the way  to live: no rich, no poor. If there was food, everyone ate; if there was no food, everyone went hungry.'"

• Pete Seeger teaches kids that sometimes it's hard to stand up for what you believe.


"On tour, the Almanacs slept on people's couches or in cheap hotels, including one with enormous cockroaches in every room. The following winter in New York City, they couldn't afford heat in their apartment. Pete didn't mind the cold. It felt good to be making a difference in the world."


• Pete Seeger teaches kids to have integrity.
In 1955, Pete was called before the House Un-American Activities Committee. He refused to take the Fifth Amendment, but also refused to share names or rat on his friends and colleagues. These choices came at great personal cost- for over a decade Seeger was blacklisted and was not allowed to appear on commercial shows.

• Pete Seeger teaches kids to be brave.
At one point in his life, Pete and the African American singer, Paul Robeson, were in an concert near Peekskill, New York. Some people were angry that whites and blacks were performing together. After the concert, they followed Pete and his family, and threw rocks at the car. Every window was shattered.


"Later  Pete found two rocks inside the car and cemented them into his fireplace. They always reminded him how important it was to stand up for his beliefs."

STAND UP AND SING: PETE SEEGER, FOLK MUSIC, AND THE PATH TO JUSTICE is illustrated by Adam Gustavson (if you are familiar with Reich's work, he also illustrated FAB FOUR FRIENDS, about the Beatles). Each two-page spread includes a large full color oil painting; many also have a pencil sketch. The book begins with a foreword by Peter Yarrow of Peter, Paul, and Mary. End notes include an author's note, as well as an extensive list of additional sources.

In these very difficult times, it's important to be able to give kids models of people who had integrity, stood up for what they believed, and did something to make the world a better place. STAND UP AND SING: PETE SEEGER, FOLK MUSIC, AND THE PATH TO JUSTICE is definitely a resource you can use. I recommend it highly.


An interview with Pete Seeger
Posted by Carol at 10:03 AM

What a gift you are sharing with your students. Important messages through books, conversations because of books. I don't know this book, but am excited to look it up.

Arvie and I took our 'then' kids to see Pete here in Denver a long time ago. It was some small venue and I don't remember where, but it's a fond memory of seeing this great man sing in person. How wonderful that you are sharing about him with the students. They will remember his "song", not just the music. I have the book on my list, but still haven't seen it.

Thank you for being a safe place for your students where they can find strength in the midst. And what a great roll model in Seeger.

Books teach us how to be human. What a great set of lessons for your kids in this book.

Another book to add to my list of great books slicers are introducing. We also have students and families who are worried. They need to know about real people who have bravely stood up for their beliefs - books like this will help them find hope.

I loved this man so much. He began the Clearwater Festival on the Hudson River years ago, and what an institution it has become. They don't make men like Pete Seeger anymore.

Thanks for sharing this book and these links. Thanks for the detailed sharing of life lessons to be learned from Pete Seeger. I'm requesting the book now.

I love everything about this post, Carol! I always love reading your writing, and Pete Seeger has been one of my heroes for as long as I can remember. The description of how the kids at your school are suffering breaks my heart. I love the thought that Pete's experiences Are encouraging to them. Thanks for reminding me to get over to The Bookies to pick up this book.