IF NOT FOR FRANKI 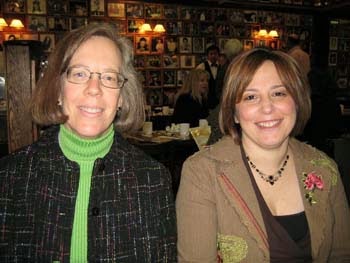 Almost midnight on a hot July night, two years ago in Denver. I have to present at a workshop the next day and should be home in bed. Instead, I'm stuck in a huge traffic jam in a construction project on I-70.

If not for Franki, I would not have been stuck in this mess…

I first "met" Franki years before, when I moved to New Hampshire. OK, so I didn't actually "meet" her then, or at least not face-to-face. Instead, I "met" her through JoAnn Portalupi and Ralph Fletcher I was doing my graduate work at the University of New Hampshire with JoAnn. Several times a year, Ralph and JoAnn would head to Ohio to present workshops. When they came back, they would always talk about Franki.

Eventually, one or the other would stop and say, "You know Franki, right Carol?" And I would say I didn't.

Then Ralph or JoAnn would always say, "Carol, you have to meet Franki. She's amazing."

We probably had that conversation twenty times in the four years in New Hampshire.

And then I moved back to Denver. And I am not exactly sure how I actually met Franki, but I did. Maybe it was when I decided I needed to start a blog. And I reached out to Franki and Mary Lee because I couldn't figure out how to insert a book cover in my posts (please note, I'm probably the only one who will not have the special Franki button Ruth created because I couldn't get it to download correctly, despite trying multiple times).  Franki and I became fast friends in the world of Kidlitosphere. And Franki was always so, so kind. And so, so gracious. She always made me feel like I had something to say.

If not for Franki, I probably would have given up on blogging a long time ago.

And then there was the hotel breakfast in Denver.

Franki was in Denver for something. Maybe a workshop? She reached out and wanted to get together. And so we met for breakfast at the hotel where she was staying. I was doing Weight Watchers and asked for a bowl of fruit and an English muffin. I was thinking I would get a couple of pieces of cantaloupe sprinkled with a few strawberries and grapes. Instead, I got a giant bowl, $15 worth of fruit, probably enough for three people. And Franki was buying! Yikes.

At the breakfast, though, Franki and I talked about a lot of things. We are both adoptive moms and we shared the ups and downs, the good times and bad. I don't think we knew each other all that well at that time, but Franki was a place where I could share how hard it was to parent two kids with reactive attachment disorder. I think I told her things I had not told anyone ever. And she didn't make me feel like a nutcase.  And we have shared stories ever since.

If not for Franki, my journey as an adoptive mom would have been much harder and much more lonely.

That day, we also talked about the role of Facebook and Twitter in professional development. Franki said, "Carol, that's how all the young teachers communicate. If we want to stay current, we have to do it too." And I realized she was right and signed up for Facebook and Twitter accounts when I got home that day. I'm not as good as I should be about posting, but I certainly have learned a lot.

If not for Franki, I probably would not be using those two incredibly important forms of social media.

And then she came to Denver for CCIRA. And presented several sessions on 21st Century Literacy. And wanted me to attend every single CCIRA session on digital literacy. And opened up a whole new world for me and for my students.

If not for Franki, the teachers and students at my school would not be nearly as technologically literate.

And then there was that night on I-70. Franki had emailed that she was going to be passing through Denver. She would have a two hour layover at ten o'clock on that July night. And Patrick Allen and I decided that we needed to go to the airport to see her.

Because that's what Franki is about. People. Connections. Books.  And laughter.

May your day and year be filled with all of those things, dear friend!

Happy Birthday!
Posted by Carol at 7:37 AM

You nailed it with this: "Because that's what Franki is about. People. Connections. Books. And laughter."

So true. So very true.

It's such a sweet post about your friend, Franki, Carol. I've still not had the luck to meet her. Maybe someday.

I have loved reading all the ways people have connected to Franki. But I have to say, your piece and Karen Szymusiak's both left me with tears in my eyes. Thanks so much for sharing.

What a great post to honor a dear friend. I especially loved this line: Because that's what Franki is about. People. Connections. Books. And laughter. Thanks for sharing with us! :-)

Carol, I cried at the end of your post because the image of you, Franki, and Patrick on the floor of the airport talking and laughing was so vivid for me. Exactly. You summed up so many feelings beautifully.

I LOVED LOVED LOVED that night at the airport but I don't think I had any idea that you worked the next day and hit a traffic jam. What good friends you are to come see me in the middle of the night! Thanks so much for this birthday post! Ralph and JoAnn were right--we did have to meet each other. But remember, I knew you from my very favorite poem of all time way before I met you!

What a fun story! I'm picturing the three of you in the airport. I would love to have listened to that conversation.

And this! "Because that's what Franki is about. People. Connections. Books. And laughter."

I am a firm believer that everything happens for a reason- It's so apparent in your post!