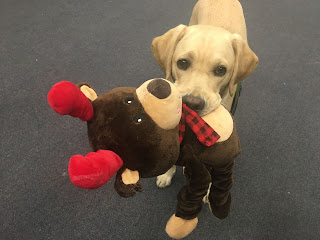 Probably the biggest change in my life since I sliced last year is Rooney. Rooney is an 11-month-old yellow lab. Technically, he belongs to Canine Partners of the Rockies (CaPR). CaPR raises mobility dogs and dogs for people with autism. About two years ago, I decided that at some point, they were going to make me retire from teaching And I had better find a hobby to fill my time. A friend of mine, Debbie, was raising a dog for CaPR and asked if I wanted to go along some time. Of course I fell in love and jumped in with both feet. Well, actually I kind of waded in, because I was a puppy sitter first, when people went out of town, and then became a puppy mom last summer.

Rooney arrived from the Bergin Institute in California last May. He attended the last week of school, including a day at the bowling alley and a picnic in a park. We had the summer to get to know each other better, and then he came back to school with me this fall. He spends part of his day hanging out in my office, and then part of the day in my classroom. He has a crate in the classroom, but often just hunts down a sunny patch of floor.

Rooney loves the kids, and the kids love him. We visit one of the ECE classrooms every morning, to help a little guy who has a hard time transitioning from home to school. He loves the little ones, and is only too willing to lay in the middle of the floor, as they stroke his ears and rub his belly. Once or twice a week, he acts as a first grade reading center. I sit with him, and kids come up one or two at a time to read. With the middle school kids, he's much more exuberant, bringing balls, stuffies, and tug toys. Once or twice a week, I will see a kid who looks a little down at the mouth, and I'll ask if they need Rooney time. The answer is almost always yes. He's good at listening to family problems and relationship breakups.

Rooney goes everywhere with me. Work every day. Restaurants once or twice a week. Rockies games. Book club. Movies. Weight watchers. Bible Study. As long as he has his blankie, he's more than willing to turn around three times, settle himself, usually with a big sigh and nap for an hour or two. Sometimes he snores, which always makes people laugh.

I will have Rooney probably until he's almost two. It's hard to think about saying goodbye, even though I know he is going on to bigger and better things. I've already told CaPR that the day I turn him in, they better have a new puppy to put into my arms. I can't imagine a day with out my sweet Roo beside me.
Posted by Carol at 6:28 PM

I love the way he is with the kids! How great it will be when he is with “his person” when he completes his training.

He fit right in at CCIRA! You are amazing!

Reading your post made my day, Carol. I am thrilled to hear how Rooney has become a part of the fabric of life for you at school and beyond. I love hearing how he already adjusts to the needs around him. What a lucky school to have you and Rooney! I’m overcome thinking about what a gift it would be to have a service dog in training at my school each day. And I’m sure the kids would appreciate it too. 😂

Thank you for doing this! My nephew has a service dog (life threatening allergies), and I remember hearing about all the training Max (and the family) went through - and still do! I may have to consider doing this when I retire, too!

I'm so glad to know more about Rooney! This seems like the most noble thing to do ever. I hadn't thought about what a gift this is to your students now, but I would imagine Rooney makes a huge difference for them.

So excited to hear about Rooney and how he's woven himself into your school and personal life. It sounds like he's a popular person (dog) at school. I love that you called him Roo. Sometimes I call grandson Robby, Robby Roo. You know we'll want more stories and pics this month.