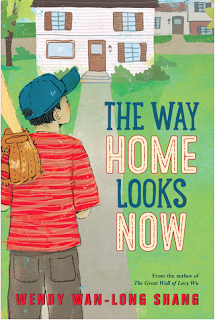 This is the second intermediate grade novel I've read recently where I've thought, "Holy cow, why haven't more people been blogging about this book?" It's by Wendy, Wan-Long Shang, the author of THE GREAT WALL OF LUCY WU, which I loved and reviewed here a couple of years ago.

When his much adored older brother, Nelson, is killed in a car accident, twelve-year-old Peter and his family are plunged into grief. Peter's mother reacts by withdrawing, sitting on the couch day after day, staring blank-eyed at the television. His pharmacist father, Ba, goes to work, and comes home and tries to care for his children. Peter looks after his little sister, worries about his mom, and misses his big brother. Nelson and Peter always loved baseball, and Peter decides that if he joins a team, perhaps his mother will come to watch him play. When there are not enough coaches at tryouts, Ba volunteers to coach a team.

At first, Peter is disappointed. He doesn't think his father knows much about baseball. This is demonstrated clearly when his father chooses one of the worst kids at tryouts as his first pick. And then his first practice goes horribly. And all of his teammates are sharing their opinions about his coach/father with Peter. And then there's a huge and very unexpected surprise, which threatens to shut the team down for the year.

And Peter discovers that his father does know something about baseball. And he also knows a little about character. And about life.

A great story about grieving and family relationships.  The book is set in the 1960's, with women's rights playing an important role. And like LUCY WU, the family is Chinese, so there's a glimpse into a different culture.
Posted by Carol at 7:21 AM