READING WITH MY EARS

A couple of years ago, I started listening to audiobooks. I was driving to Colorado Springs a lot more often and the 130 mile round trip was tedious. A friend suggested I try audiobooks and I was hooked. I listen read mostly adult books, with a little YA thrown in. I love nonfiction- biographies, memoirs, etc., but don't like books where I'm trying to learn nearly as much, because when I read those, I feel like I need to take notes so I can remember more. Depending on how much driving I am doing, I can knock out a book in two or three weeks.  This summer I've read a couple that I have thorougly enjoyed. 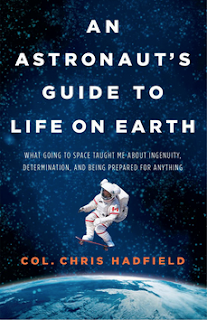 AN ASTRONAUT'S GUIDE TO LIFE ON EARTH is a memoir by Canadian astronaut Chris Hadfield. From the time he was a very young child, Hadfield knew he wanted to be an astronaut, and planned his life accordingly, rising up through the pilot ranks of the Canadian Air Force and finally being selected as one of four people out of over five thousand who applied (talk about perseverance!). Between 1995 and 2012, he went to space three times, with his last mission being five months on the International Space Station. His stories of life as an astronaut are super interesting-- if I was trying to sell this book to middle or high school kids, I'd read the chapter about re-entry into the atmosphere on his final flight. There's also a little life philosophy thrown in. While he was in space, Hadfield also made a series of Youtube videos about life in space, in this one he makes a peanut butter and honey sandwich. And here's another one where he explains what it's like to cry in space. The audiobook is read by Chris, and I think it would be terrific for a family road trip! 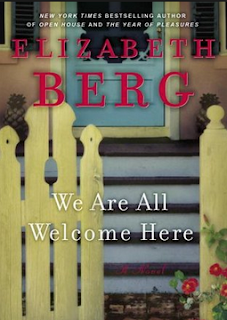 My other recent audio read was WE ARE ALL WELCOME HERE, read by author Elizabeth Berg. Diana Dunn is a fourteen-year-old girl growing up in Tupelo, Mississippi in the 1960's. She is being raised by her mother, Paige, who had polio when she was eight months pregnant, and is paralyzed from the neck down, and Peacie, her mother's African American assistant. I loved Paige's indomitable spirit; in some ways she reminds me of a female Atticus Finch (and no, I haven't read the new Harper Lee book yet). This is a really fast audio read, only five discs. In an author's note before the book, Berg says the story came from a letter that she received from a woman who actually grew up in a similar situation. Quick and enjoyable- it would be a good mom and teenage daughter road trip book.