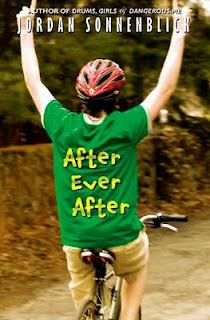 Not much blogging going on right now. It's not that I am not reading, because I actually have read quite a bit. Think it's more that most of what I have read has been recommended by other bloggers, and since they have already blogged about it, I wonder what I would have to say that is new or different. Which makes me wonder why I am bothering to blog at all, but that's probably a whole different post. Anyway, as far as what I have been reading lately…
AFTER EVER AFTER by Jordan Sonnenblick
Jeffrey is an eighth grade leukemia survivor. The lasting effects of chemo have shaped Jeffrey as a learner and a human being. He struggles with math, for instance, even though his dad is an accountant and math whiz. Nerve damage in one foot has left him unable to participate in physical education, or play the drums with his beloved older brother, Steven. Because of his struggles, Jeffrey is totally surprised when Lindsey Abraham, a hot new eighth grader from California, becomes interested in him. His delight in this new relationship is overshadowed by worries about passing the state math test and/or being retained in eighth grade, missing Steven, who has taken a year off to go to Africa and play the drums, and concerns about his best friend, Tad, who is also a cancer survivor.
Jordan Sonnenblick is an author that's new to me. I don't teach middle school and probably won't use his work a lot in my classroom. Even so, I enjoyed AFTER EVER AFTER tremendously and think middle school kids would love the real-life issues and relationships, also how Sonnenblick moves in and out of various teen friendly genre- email, instant messages, bulleted lists, etc., to tell the story. I have gotten recommendations from Twitter buddies for a couple of more that I want to read. 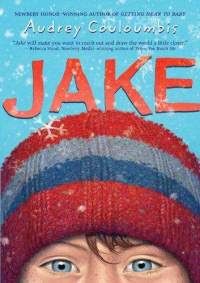 JAKE by Audrey Couloumbis
It's Saturday morning, the week before Christmas, and Jake and his mother are at the grocery store when she slips on the ice and breaks her leg. The hospital social worker asks Jake for the name of a relative. Aside from Mrs. Buttermark, a grandmother-ish neighbor and family friend, the only person Jake can think of is a grandfather, his father's father, who he hasn't seen since his dad passed away many years earlier. A sweet story about relationships and reconnection-- I especially loved the connection between Jake and Mrs. Buttermark, because I know so many kids who rely heavily on neighbors, or people who aren't biological family, for physical and moral support. 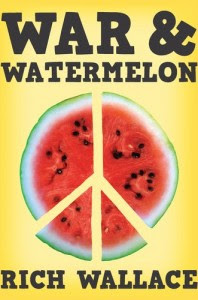 WAR & WATERMELON by Rich Wallace
Brody Winslow is going through a lot of changes. He's starting seventh grade and will be going to a new school. He's trying out for the football team. And trying to figure out the girl thing. Maybe most importantly, his older brother, Ryan, has just graduated from high school, and is trying to figure out what to do with his life. He's not sure he wants to go to college, at least not right away, but the Vietnam War is in full swing, and if he doesn't go to school, he will probably go to war. Brody is caught right between his parents, who love their son and don't want him to go to Vietnam, and his brother, who doesn't want to go to school, but also doesn't want to fight a war he doesn't believe in.
I enjoyed this book. I grew up during the Vietnam War. When I was about eight, my cousin, Greg, who was a junior in high school, came to live with us for a couple of years. I remember many, many similar conversations around our dinner table. I think this book would be perfect during a study of that era. If kids didn't have some background knowledge, however, I'm not sure that they would really "get" the historical aspects of WAR & WATERMELON. 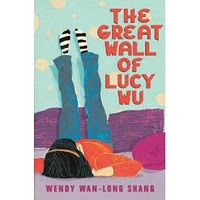 THE GREAT WALL OF LUCY WU by Wendy Wan-Lung Shang
Lots of people have been "talking" about LUCY WU. Mary Lee's brother, Dave, reviewed it on YEAR OF READING a couple of weeks ago. Karen reviewed it on LITERATE LIVES. Lucy Wu thinks she is going to have a perfect sixth grade year. Her sister, Regina, is leaving for college so Lucy will finally have her own room. She loves basketball and is eagerly looking forward to the start of a new season. Things change, however, when Lucy finds out that her great aunt Yi Po is coming to stay for a few months, and will be sharing Lucy's room. Lucy's parents decide she should attend Chinese School, which meets at the same time as basketball practice. And the class bully, Sloane (whose mom is President of the parent organization), does her best to make Lucy's life miserable.
Like Dave and Karen, I loved this book. Wendy Wan-Lung Shang really gets the life of a sixth grader, and especially a sixth grader from a different cultural background- that balance between trying to fit in, trying to be your own person, and yet also still retain your family's rich cultural history. And Shang teaches kids a heck of a lot about the Cultural Revolution in a way that is interesting and not preachy or forced. This one would definitely be on my shelf if I taught upper intermediate grades or middle school.
And right now? Well right now I'm rereading Patrick Allen's CONFERRING, in preparation for an online PD experience (thanks to Cathy Mere for organizing this) and am also reading he adult novel, ROOM, by Emma Donoghue.
Posted by Carol at 7:59 AM

Guess I should grab Patrick's book from my classroom this week and reread, too. Otherwise, I'll be left out of the cool group doing the online PD!!

Carol - I absolutely ADORED After Ever After. It was great to catch up with Jeffrey from Drums, Girls and Dangerous Pie. Thanks for the other book reviews, as well. I've got more books for the to-read pile!