MAY B- Caroline Starr Rose 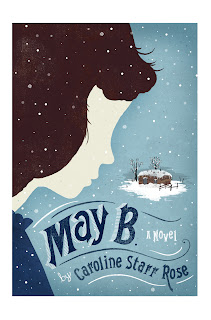 Mavis Elizabeth Betterly (better known as May B.)
is about twelve years old.
Growing up in a soddy
on the plains of Kansas.
May wants to be a teacher
but is struggling to learn to read.
Her father hires her out
to Mr. and Mrs. Oblinger.
Drives her the fifteen miles
out onto the prairie
promises he will be back
to pick her up at Christmas…

A debut novel
told in verse
Would be great for a unit on
the Westward Movement
or life on the prairie.
Could be paired with
the Little House books
or Sarah Plain and Tall.

A quick and compelling read.
Posted by Carol at 8:57 AM 2 comments: 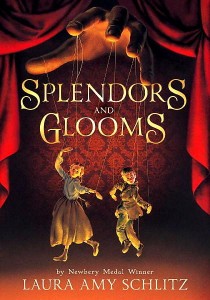 Ok, I'm just going to be honest. I did not expect to like this book. I thought SPLENDORS AND GLOOMS was fantasy, and I chose it as my #bookgapchallenge read for vacation. I thought it was fantasy, and it was, but just a little. It was really more Elizabethan fiction/mystery.

I started "reading" SPLENDORS AND GLOOMS on audiobook in the car. I'm not a big audiobook person,  (unless I'm going on a trip), but somehow, when I reserved this book, I accidentally reserved the audio version. When I discovered what I had done, I decided I might as well just take the audio version. That day, however, I also happened across the print version in the new books section of the library.

The woman who reads SPLENDORS AND GLOOMS on the audiotape is a British actress, and she is really, really good. I'm not one of those people who can do different accents, and hearing her voice helped me get into the spirit of the book. I've long said that kids need to hear books read aloud, and I'm a huge advocate of "jumpstarting" kids by reading a chapter or two aloud, to help a reader who's struggling get the author's voice into their heads. I think that's exactly what Davina Nelson (I think that's her name) did for me with this book.

SPLENDORS AND GLOOMS is one of those books where the reader has to hold on to a lot of different pieces. The forward to the book is a section of a poem by Percy Bysshe Shelley.


And others came…Desires and Adorations,
Wingéd Persuasions, and veiled Destines,
Splendours and Glooms, and glimmering Incarnations,
Of Hopes and Fears, and Twilight Fantasies …

And then the reader is taken to the bedroom of a very old, very ill woman, named Cassandra. Cassandra is a witch who has a powerful, and yet somehow evil,  fire opal necklace. From there, one travels to the streets of London in 1860, and meets Clara Wintermute, a wealthy young woman whose family has suffered a terrible loss in a cholera epidemic. Clara is celebrating her 12th birthday, and has invited a marionette troupe to perform at her party. The puppeteer, Gaspare Grisini, is assisted by two urchins, Lizzie Rose, who has lost her parents to cholera, and Parsefall, a rough little guy rescued from the workhouses of England. The night of her birthday party, Clara disappears. It's up to Lizzie Rose and Parsefall to discover where she has gone…

Schlitz does a masterful job of keeping the reader guessing. Where has Clara gone? Can Lizzie Rose and Parsefall rescue her? Is Cassandra good or evil? And what about Grisini? Who is he? And how are Cassandra and Grisini linked? What is the power of the necklace? This is a book where even a pretty sophisticated reader has to be on her toes, or she will miss something important.

I didn't expect to like this book. I'm really glad I challenged myself to read it, because I ended up loving it.
Posted by Carol at 12:27 PM 2 comments:

and I'm honored to host
from cold and snowy Denver.

Seems like it should be a time
for deep profundity
or great levity
or the reviewing of resolutions.

Leave your poems, (deeply profound or otherwise)
in the comments
and I will round them up periodically
throughout the day tomorrow.


"Questions Before Dark"
Day ends, and before sleep
when the sky dies down, consider
your altered state: has this day
changed you?  Are the corners
sharper or rounded off?  Did you
live with death?  Make decisions
that quieted?  Find one clear word
that fit?
Jeanne Lohmann