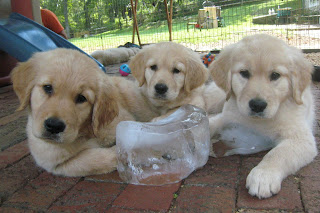 My name is Carol and I'm a puppy addict.

It all started last summer.

My oldest son had just left for college.

And then, about a week later,  Jack, my four year old Lab/Rottweiler/four-legged garbage disposal, ate something and had to be put to sleep.

And then the Aurora theater shooting happened. And while those things are always really hard for me, that one, at the theater in my city, where my sons saw their first movie, and often went to movies, hit way too close to home.

That day, Cynthia Lord posted a picture on Facebook. She had started watching a puppy cam.  The Warrior Canine Connection is an organization that raises golden retrievers and yellow labs. The dogs that are by veterans struggling with PTSD. After that, they become service dogs for other veterans.

Somehow, the Warrior Canine Connection, became connected with  www.explore. org, an organization that has cameras in habitats all over the world, and Explore put a webcam into their puppy pen. At that time, there was a gorgeous Golden Retriever mama, Holly, with six puppies, that were only a few weeks old.

And so I started watching Abby, Grace, Levi, Penny, Ruby, and Lucy. I watched them as they nursed, then learned to walk. I watched them as they cooled themselves against an ice block and played in a wading pool in Molly's backyard in Brookville, Maryland.  And I watched, OK, more than a little jealously,  as volunteers with the organization came to pet and love on the puppies, socializing them for their life in the world.

I especially loved watching Molly, the co-founder of Warrior Canine Connection train the puppies. When they were a month old, Molly trained them to use a litter box. They could sit for treats. They donned their little Warrior Canine Connection vests and went out into the world to love on vets. I also loved watching Molly's toddler, Mia, interact with the puppies. 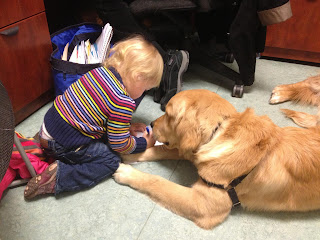 Mia and Levi working on a project

Even though I knew, all along, that those puppies had an important job to do, and wouldn't be in Molly's backyard for ever, I have to confess that I was more than a little sad when they got big enough to go out into the world, to foster puppy parents.

And that might have been the end of the story.

But no. There were highlight reels. And so I watched those, over, and over, and over again. And the puppies have Facebook pages. Some of the foster parents post pictures and even videos which are also lots of fun.

And then right after Christmas, a new litter, this time yellow labs, was born. And I started watching Flurry, Blizzard, Derecho, Twister, and Breeze (named the Weather Litter because they were conceived during Hurricane Sandy). Eventually they were joined by Bea, a golden retriever who was a gift from another breeder. And my puppy watching started all over again.

You can watch the latest litter here, but only for a few more days, because they are also heading out into the world, in fact, about half of the litter is already gone. You can also follow them on Facebook. And with any luck, there will be another litter of puppies sometimes this summer.

I certainly hope so.

Because  I'm a puppy addict. 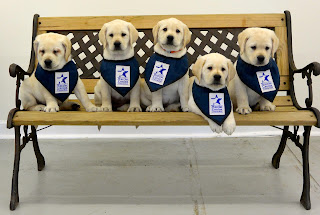 Those pictures are adorable, I can see why you're addicted. I'm not even letting myself click on your links, lest I develop another addiction! Thanks for the post - I needed some cuteness to start my day!

Yes it starts off innocently enough. You casually mentioned this link last summer in one of your slices and I clicked. Before I knew it I was checking in often! First off there are these adorable puppies with personalities and antics. There is something more as one becomes aware of the mission of the Warrior Canine Connection and that these pups have a bigger purpose to fulfill. I am glad I clicked. Carol you aren't the only one who gets great joy from these pups!

Oh, boy...this is going to be a difficult website to resist!

Adorable! So, when will this addiction take you to adopting??? You are going to need some company soon!

What adorable puppies - no wondfer you're an addict!
A friend is fostering a poodle for a year as it is prepared for life as a special dog. She even has it at school each day. What a treat it is to see Brandy ever day. There is even a club of kids who take turns walking her each recess.

I can't believe we posted about the same addiction today! I switched the channel a few weeks ago to see Olive, a great Dane, have a new litter. I am so addicted. http://reflectionsontheteche.wordpress.com/2013/03/13/puppy-watching/

After reading another post about puppy cams, I had to check out yours, too. I'm almost afraid to look. I might find myself addicted, too.

Our 16 yo lab had to be put down 4 years ago, but this year my oldest decided she NEEDS a puppy. Pictures and videos and pleading texts. Maybe the Warrior Project will fill her void. Thanks for sharing - enjoy the puppy antics!!