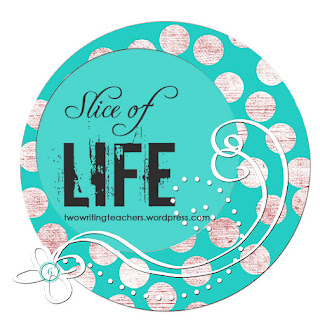 I hear this with mixed emotions. On one hand, I am glad that my son does not want me to come. The track meet is about 90 minutes away on rural backroads. It's the end of my vacation and I still have lots I need to do and lots I want to do. On the other hand, I love watching my boys perform. I can count on one hand the number of games and practices I have missed. I am there for them. That's what mothers do.

K is insistent. "I mean it. I don't want you there." We go back and forth several times and finally I acquiesce. "All right, I won't come," I say.

I am awake the next morning when he gets up at 4:15. I lay there, listening to his 6'5" body tromp around in the bedroom above mine for about thirty minutes. Finally I get up.

"Are you sure you don't want me to come?" I ask again.

He leaves a little after 5 and I go back to sleep for a couple of hours. I wake a little after seven, intending to work on my slice, then spend the day doing yard work and house work.

But I cannot stop thinking about my son. I have always been at his meets and it feels wrong not to be there for him. I try, unsuccessfully, to concentrate on my slice. I can't do it.

Finally, after 45 minutes of wrestling with myself, I stand up and put my computer aside.  I don't care what my son says. I am going to be there for him. That's what mothers do.

After a quick stop at the bank, I am on my way. I drive for 90 minutes, drinking in the blue, blue Colorado sky and the picture postcard beauty of Pikes Peak. Finally I arrive. The parking lot is filled with buses and buses and buses. I wonder if I will be able to find my son, but when I come around the corner, he is one of the first people I see, standing there with his girlfriend.

He looks angry. "What are you doing?" he hisses.

He turns away. I head for the bleachers, planning to stay for a couple of hours.

Five minutes later, my son stands beside me with his girlfriend.

"Do you have any money?" he says. "Can you buy us lunch? R (girlfriend) tried, but they won't take any cards."

"Because that's my job. That's what mothers do."

We walk to the concession stand, and I buy $10 worth of chicken sandwiches and gatorades. I remember a candy bar, purchased to meet a $5 minimum at a convenience store, that I have shoved into the bottom of my purse and hand that to him as well.

"You're the best," says the son who did not want me to come.

"Are you staying to watch me run?" says R. "You missed my first events, but I will run again later, toward the end of the meet."

I tell her I have to run an errand before three, back in town, but I will stay as long as I can.

Track, in my opinion, is about as exciting as watching paint dry. Thirty seconds of action, followed by ten or fifteen minutes of waiting. I sit there for one hour, two hours, three hours, almost four. I try to read, but have a hard time concentrating.

Finally, I find myself standing by the fence, holding a pair of kind of smelly pink tennis shoes, while R runs.  I cheer frantically, throw the tennis shoes over the fence, and give my son a hug, then dash to the car so I can make it back to Denver to run my errand.

Because that's what mothers do.
Posted by Carol at 6:55 PM

I really loved this story! I'm glad that you decided to go. Sometimes I wish my parents hadn't listened to me when I told them not to come to a game in high school - for as embarrassing as parents can be sometimes, every kid still wants their never-ending love and support. This story is great advice for the future - my girls are 2 and 5 1/2 months. Thanks for sharing!

You ARE the best! You are a wonderful, caring, loving and supportive Mom. This is a great story of Mother love.

This is a great post, Carol. Being a mom is so hard because what they say is sometimes not what they mean. You told this in such a funny, but meaningful way, where we could completely feel your inability to concentrate on your slicing. I'm glad you went and that he was, too.

Actions count, and I still bet K will come around. Remember how kids take this crazy/ornery stance & won't back down. I don't think they really mean it, but somehow it's a test. We have to pass it again & again with some kids. You're a great mom Carol, & I would have said that if you hadn't gone, too!

Deep down in your heart you knew you had to go. I will echo the sentiments of your son, you are the best, because you do what mothers do. One day your son will understand.

You're the best, mom. I don't know that I would have come to the meet.
BOnnie

Yes, you did what mothers do - support their kids no matter what. What a lovely story to end the month.
Happy Easter Carol. Have so enjoyed all your slices.