Thursday night. I have an appointment at 6. Traffic in Denver is pretty unpredictable, so I leave work at five, just to make sure I'm on time. Sometimes I leave at 5, and get there with only minutes to spare. Other times I leave at five, and am there in twenty minutes.

Tonight, I am there in twenty minutes. We are finishing our state tests, and I'm tired. It actually feels good to sit and wait. And I love this office, because she has lots of good magazines. Ones I wouldn't necessarily buy- Readers' Digest, Prevention, Cooking Southern Style (that might not be the exact title, but it's the gist of the magazine)- but that are kind of fun to read. And who cares if they are six months old. It's not like I'm reading six month old issues of Time or Newsweek.

I am leafing through a Readers Digest from last June when I find it. An article about five high school students who had survived a bear attack in the Alaskan wilderness. One of the kids, Sam Gottsegen, is actually from Denver. He's even a student in the Denver Public Schools.

By the time the doctor comes out to greet me, I am practically worked into a frenzy. "Can I please borrow this magazine?" I ask. "I promise I will bring it back."

Roxanne looks at the magazine, then at me. "That one?" she says. "It's six months old. You can have it."

"Carol," she says a little more firmly, "you can have the six-month-old Readers' Digest.  I don't need it back. There are plenty of magazines here. Just take it."

I shove my treasure into my purse, careful not to bend the corner. You see, I am a woman with a plan. 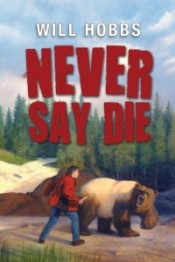 For the entire week of state tests, I have been filling the time between tests by reading aloud to my group of seventh graders. I chose a brand new book by Colorado author Will Hobbs. NEVER SAY DIE is the story of Nick Thrasher, a teenager growing up in a remote part of Alaska. While hunting caribou to feed his grandfather, who is dying of cancer, he encounters a strange and aggressive creature, a hybrid grizzly and polar bear known as the grolar bear.

Shortly after that, Nick is contacted by an older brother, who is a wildlife photographer. The brother wants Nick to accompany him on a rafting trip to a remote region where they will take pictures of the caribou migration. On the trip, they once again encounter the mysterious grolar bear.

My seventh graders are enjoying the book, but they are not quite sure they believe the bear piece. They don't believe that bears are that big. Or that they can run that fast. Or that they would be that aggressive. Nothing I say or do convinces them.

But now I have an article. With pictures, In a six month old magazine.

I cannot wait to share my treasure with my students.

Because that's what readers do.
Posted by Carol at 8:50 PM

So many things to cheer for in this. First what a brillant idea to read an adventure book between testing. Then I could just feel your excitment when you found the article, sheepishly asked to borrow it, got to keep it and are relishing sharing it.This is what great teachers do, Carol!

Maybe you can find the boy from Denver and he could come talk to your class? Your idea about the read aloud (as Kim said above) is terrific. And taking the time & interest is what readers (& good teachers) do for sure!

AWESOME!!! I love it when those connections happen...you can almost hear the clouds part and the singing commence!

Serendipity, that's what it was. Isn't it funny what excites teachers.

What a great connection.

Have you thought of using skype or google hangout and talk to a fish and game person in Alaska about your bears? http://www.adfg.alaska.gov/index.cfm?adfg=education.main. I noticed they are having an upcoming event about tracking bears.

I loved hearing your excitement. Like a little kid at the candy store - it was just wonderful!

Wonderful reasons for reading--information and enjoyment. Will Hobbs is great and it sounds like you have a heart for teaching-- reading to 7th graders during testing time!

I love that you were so excited and so connected with your 7th graders! Whenever I read aloud The Fear Place (a boy's encounter with a mountain lion) I have a newspaper article to point out the recent sightings and even captures of mountain lions right here in our state (MO) otherwise the kids just think it is purely impossible!