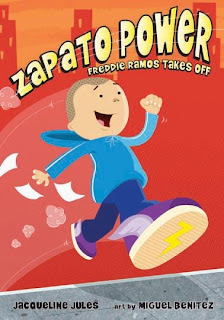 Freddie Ramos comes home from school one day and finds a package waiting for him. Inside he discovers a pair of purple sneakers with silver wings. He soon learns that the shoes are not just any old shoes, however, they are magical tennis shoes that enable Freddie to run faster than a train. He uses the shoes to help his friends and solve a mini-mystery.
I could see this book having a definite place in a primary grade library. It's a short chapter book (77 pages) with relatively large print and lots of pictures scattered throughout- terrific for those little guys who are just starting to read chapter books. The main character is a Hispanic boy, definitely needed in my urban setting, where over half of the kids speak Spanish as their first language. Freddie lives with a single mom, but there are several references to his father, a soldier who was killed in the war. Freddie also has significant connections with his Uncle Jorge, and the building landlord, Mr. Zaslov. As someone who works in a school where many of the children don't have fathers, I love seeing other mentor relationships validated.
Based on the last line, "Can you make flying shoes?" I thought there might be at least one more book in this series. I hope so. When I googled it, I discovered that book #2 has already been released, and #3 will be out in March. Always good to have a new series so that beginning chapter book readers can cut their teeth on.
Posted by Carol at 9:58 AM