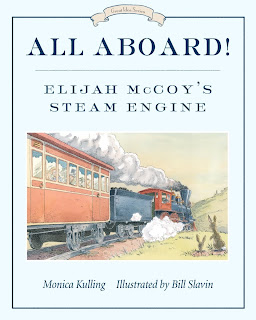 I've been struck, as I've read the CYBILS nonfiction nominees, by stories of perseverance. People's lives, for whatever reason, just aren't easy. It takes hard work. Not giving up. Trying again and again. Here are a couple of biographies that really illustrate that point.

Chances are, you've heard the expression "the real McCoy." But did you know that that expression came from a real person, an African American engineer that lived in the 1800's? Elijah McCoy was supposed to be a mechanical engineer. His parents, former slaves who had arrived in Canada, via the Underground Railroad, had saved every penny they could to send him to Scotland to complete his studies. But when he arrived back in Michigan, there was only one job available for a black man at the Michigan Central Railroad. Shoveling coal. McCoy needed work, so he took the job. But McCoy didn't let his circumstances define him.

Instead, McCoy invented. McCoy's job was to shovel coal as fast as he could. Another boy, called a grease monkey, crawled under the train and oiled the moving parts. The steam locomotive would work for about half an hour, then it would stop cold, until the grease monkey oiled the parts again. McCoy believed there had to be an easier and safer way to oil the engine, so over the course of several years, he invented a drip cup that oiled the engine while the train was running. And then went on to develop 57 more patents- more than any other black inventor. Put this book in a study of perseverance, or in your biography section, or in a study of inventors, or in an African American history unit. 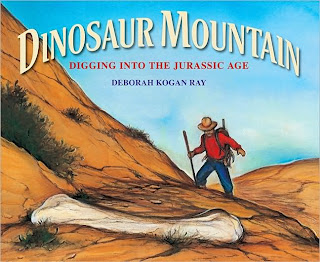 REVIEW COPY FROM MY LOCAL LIBRARY

Earl Douglas was a geologist, botanist, and paleontologist working at the Carnegie Museum of Natural History in Philadelphia. Andrew Carnegie, caught up in the "Bone Wars" of that era, wanted "something big" for his museum. Several previous discoveries had been made in Colorado and Wyoming, but Douglas believed that areas in northeastern Utah held possibly the greatest potential.

Douglas' tale, however, is again not one of immediate success. In that first year, 1908, he found only a small collection of mammal and reptile bones, nothing big. Just before Douglas was set to break camp for the winter, his boss, William Holland, came for a visit. On a final fossil hunting expedition, they found a large diplodocus bone, in a gully with rock walls they identified as "Jurassic strata." The next spring, Douglas returned, but it took him until August to find his first large discovery- the tail bones of a seventy-foot Apatosaurus.

Douglas spent much of the rest of his life digging dinosaur skeletons in this area on the Colorado/Utah border, now known as Dinosaur National Monument, but the work was slow and hard. It took four years to dig out the apatosaurus. That first winter, he and his wife and one-year-old son lived in a canvas lean-to in temperatures as low as -40 degrees. Poachers tried to take some of the bones. Andrew Carnegie died in 1915 and there were no more funds for the excavation.

I loved this book. A perfect biography for a unit on perserverance, or dinosaur lovers, or Colorado kids who often visit Dinosaur National Monument. I also loved the book design. Deborah Kogan's large, water color illustrations are beautiful, but they are accompanied by diagrams and pencil sketches of other useful information, e.g. Jurassic Strata. Many pages also include a sidebar from Douglas' journal. Appendices include drawings and information about ten dinosaurs from the Jurassic Age, a map of the area, an author's note, information about Dinosaur National Monument, brief biographies of Earl Douglas and Andrew Carnegie, and a glossary.

For a really interesting interview with Deborah Kogan Ray, including preliminary sketches from this book, check out SEVEN IMPOSSIBLE THINGS.