Clement C. Moore was a professor of Greek and Oriental Literature at Columbia College, and his greatest scholarly achievement was a Hebrew dictionary, the first of its kind to appear in America. But he also loved to write stories and poems for his nine children.

On Christmas Eve in 1822, when the Moore children had hung up their stockings for Christmas, their father entertained them with a poem he had penned for them as a Christmas present. The story which began with the immortal words, 'Twas the night before Christmas…' was later written down for the children, who memorized it and recited it for family and friends. A family friend, who heard it sent a copy to the editor of a New York Newspaper, The Troy Sentinel, where it was printed anonymously the following Christmas with the title, 'A Visit from Saint Nicholas." (Taken from the foreward in Robert Ingpen's THE NIGHT BEFORE CHRISTMAS). 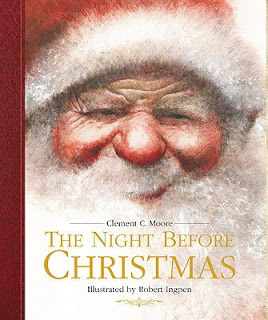 When I was in fourth grade, we memorized Clement Clark Moore's, "Twas the Night Before Christmas." I vividly remember standing at the front of Miss Scott's classroom, girls in the front row, boys in the back, holding my ragged, smeared, purple dittoed copy of the poem, and reciting it day after day, for the entire month of December. I loved that poem, then, and still do. I think I would have loved it even more, however, if I had had the version that showed up in my mail a couple of weeks ago. Australian illustrator Robert Ingpen's version of this old classic poem is the one I will be sharing with older children and giving as a gift to friends and family this Christmas. The richly detailed oil paintings are absolutely beautiful, one of those eye feasts you want to savor again and again. 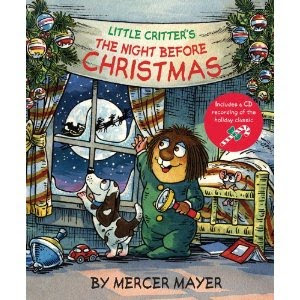 LITTLE CRITTER'S NIGHT BEFORE CHRISTMAS, would be a perfect way to introduce the poem to primary aged children. It features Little Critter, a friend most children know and love. Mercer Mayer has done a terrific job highlighting interesting vocabulary in his illustrations, e.g. visions of sugarplums (candy canes and lollipops and Hershey's kisses dance around a sleeping Little Critter's head). And there's a CD, so it would be a great listening center.

Hi, Carol. We were gifted a book written by one of the poet's grandchildren. It includes the poem, but also some family history about its origins. Looking for the title and author for you!

Thanks! I'd love to have this title.

I have fond memories of this poem. On Christmas Eve, Dad always read us the poem and then Mom read us the Christmas story from the Bible. Both will forever have my parents voices and cadences attached to the text inside my memory.

If you are looking for a new holiday book, the classic version is absolutely gorgeous!