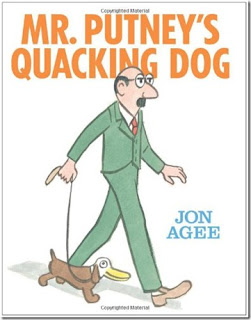 This afternoon Son #2 needed a new needle for his DJ turntable. We went to the local music groupie store, which happens to be right next to the Tattered Cover, so while he bought his needle (which took more than 30 minutes and necessitated listening to several albums-- yes, albums, old time records like I used to have when I was a teenager!), I wandered over to the TC to read. Here are three of my favorite finds:
MR. PUTNEY'S QUACKING DOG- JON AGEE
Mr. Putney is a straight-laced, bald little guy, who has all kinds of unusual animals in his life. Each page begins with a question, then on the next page, the reader gets the answer.
Q: What do you call Mr. Putney's quacking dog?
A: A ducksund
Q: Who wakes Mr. Putney up in the morning?
A: Alarmadillo.
Q: What do you call the messy shellfish that splashes Mr. Putney during lunch?
A: The slobster.
The animals also have their own comments. Really clever word play from start to finish. 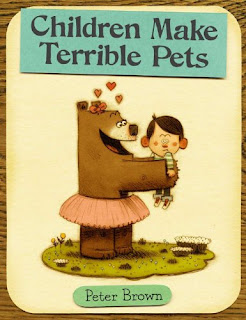 CHILDREN MAKE TERRIBLE PETS- Peter Brown
Lucy, a tutu-wearing bear finds a creature, who happens to be a little boy, when she is out playing in the forest one day. She takes him home and convinces her mother to let her keep the pet, who she names Squeaker. She soon discovers, however, that pets are a lot of work. Squeaker is hard to potty train and makes lots of messes. A great reversal of child and animal roles. Kids (and adults) are sure to love this one.
Seven Impossible Things did a terrific interview of author/illustrator Peter Brown. Lots of sketches and early drawings from his books. 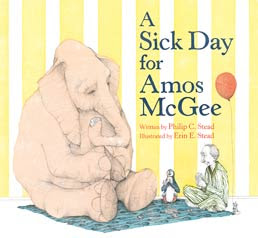 My last find, A SICK DAY FOR AMOS MCGEE- Philip C. Stead, falls into the "sweet" category. Amos is a kind old zookeeper, who gets up every morning, eats his breakfast, and rides the bus to the zoo. He plays chess with the elephant, always has a tissue for the rhino's runny nose, and reads stories to the owl, who is afraid of the dark.
One day, Amos wakes up sick, and can't go to the zoo to take care of his animal friends, so they decide that they need to go to him. A sweet, sweet book with a huge "Aah factor" at the end.

I LOVE Children Make Terrible Pets. I wrapped two copies for Christmas gifts. funny when i ordered my Christmas books (Yes all the children in my life get books!) I stuck on a couple for me. One was A Sick Day for Amos Mcgee.
Merry Christmas dear friend.