Slice #16- They deserve a look too 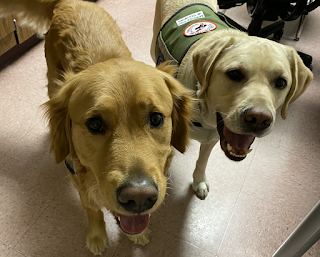 For almost three years, I have been a puppy mom for Rooney, the world's sweetest yellow lab, who will, at some point, become a service dog for someone with mobility issues, or an autism dog. Rooney is the world's sweetest guy- he's calm, he's gentle, he's patient, he's kind, he loves kids of all ages, and he rarely barks.

Rooney has two minor faults. First, he's a little bit timid about trying new things. It takes him a little while to warm up to new situations. Second, he's friendly, but he's not overly friendly. He is fiercely loyal to the people he loves, and he will be polite to other people, but he doesn't go out of his way to make new friends. And now that he is almost three, and ready to be matched to his lifelong partner, that feels like a teeny bit of a problem. Rooney is more than happy to meet new people, but he doesn't go out of his way to befriend them. When potential clients come to observe classes, sweet, gentle, quiet Rooney is not the dog that stands out for them.

Today, Rooney brought his friend, Pike, to school with him. Pike is a two-and-half-year-old golden retriever. He has recently been matched and will be working with a seven-year-old boy with autism, starting in May. Pike is Rooney's best friend, but he is also his polar opposite.  Pike is a happy, happy guy, whose tail wags from the time he wakes up in the morning until he goes to bed at night. When he is really happy, he prances. And he's always up for a new friend or a new adventure; he was delighted to meet 450 new friends today!

Watching Pike and Rooney today made me think about the kids in my class. Some of them are like Rooney. They are quiet, kind, respectful hard-working, rock solid performers,  but are not particularly flashy or self-promoting. Other kids are more like Pike. They are joyful and energetic and flashy and people notice them. They get lots of attention and lots of floor time. And there is nothing wrong with that, but sometimes the quieter guys get overlooked. Tomorrow, I'm going to try to pay more attention to the Rooneys in my classroom. They deserve a look too. 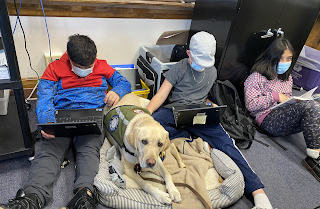 Pay attention to the Rooneys - that is a lesson for every teacher, I think!

This post really stuck with me. I'm trying to make sure I notice the Rooneys. So many students simply demand attention, and it's easy to focus on them to the exclusion of others.