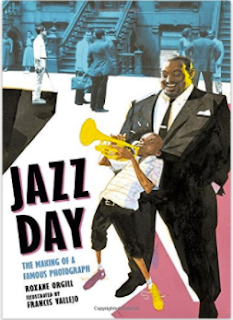 People who have read my blog know I always like a few facts with my poetry. That's probably why I loved JAZZ DAY: THE MAKING OF A FAMOUS PHOTOGRAPH by Roxanne Orgill. JAZZ DAY tells the story, through poetry, of a famous photograph, that was taken in 1958.

An introduction explains the background behind the photograph. Esquire magazine was planning an issue devoted to jazz music. Graphic designer, Art Kane, who was  NOT a photographer and had to borrow a camera to take the picture, decided to gather as many jazz musicians as he could and take a photograph. Kane found a brownstone on a street in Harlem, the magazine put out a call through the musician's union, and history was made. The actual photograph is included in a fold out page in the back of the book.

The story is told through about twenty poems. Some poems capture the big picture.

"The Golden Age of Jazz"
The cover's cerulean
For the special supplement
Esquire, January 1959
Inside, the big picture:
Fifty-seven musicians
All living, all gathered
in black and white
A long August morning
Stretched into the afternoon
Fifty-seven musicians
Standing on a stoop
Spilling on the sidewalk
Still talking
Can you hear the music
Window street brownstone
No sky
Although the sky
Was in fact cerulean
that day


Others are told from the point of view of the musicians that attended the event.

Theolonius Monk
The man from the record company hired a taxi
To pick up Theolonius Sphere Monk
Who had a regular gig with a quartet
At the Five Spot in Cooper Square
Turned them away
Night after night
Late
Monk was always late
For work at the Five Spot
Straight to the piano
To play a melody
His quartet could not follow
Did a dance during Johnny Griffin's solo
Or went for a stroll through the club
Six nights a week Mondays off
Ten in the morning was unspeakably early
For Thelonious Sphere Monk
Who was always
Late
Taxi waited outside his building
On West Sixty-Third
Meter running
An hour and more
While Monk tried on jackets
To complete the perfect outfit
Emerging at last in pale-yellow linen
Skinny tie, dark slacks, porkpie hat
And the inevitable bamboo frame sunglasses
The ones he always wore to play
"Misterioso"


Several of the poems are told from the point of view of Alfred, a little boy on the street that day.

Alfred, a boy
A dozen nickels saved
A month of matinees
Missed
And there I am
Alfred
In the bottom row
In my suspenders
Next to Nelson and the Count
Holding onto his hat
Leroy in short pants
And the other boys
A whole lot of men
And three women
In their Sunday best
Me, Alfred
With a patch on my knees
But jeez
I'm in a magazine

Back matter includes an author's note, biographies and color photos of about 15 of the more famous musicians, and a page that lists other artistic endeavors- books, movies, etc., that have occurred as a result of the famous photograph.

JAZZ DAY marks illustrator Francisco Vallejo's first foray into picture books. I hope there will be many more because his illustrations (I think they are watercolor) are gorgeous.

Add this book to your reading list for African American history month!

I loved this book, too, Carol, especially the varied POVs & the illustrations are terrific. FYI-you left the incorrect link at Jone's round-up!

Thank you, Carol, for highlighting my book. I like facts with my poetry, too. (I'm REALLY into details.) My next book is a whole bunch of poems about the Siege of Boston, which launched the Revolution. Facts galore!

Way cool! Can't wait for Roxane's next one, too!

What an exciting find! Thanks for sharing it, and congrats on all the great haiku! Keep 'em coming!

I love this book as well.