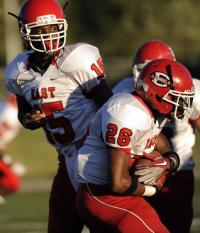 BACK STORY: This morning, Margaret Simon, at Reflections on the Teche lifted a line from Jane Yolen, "I know you by what you hold, and wrote this, a kind of a love poem for her husband of 34 years:


#23
Peanut, the dog’s ball–I know you by what you hold–Lightbulb, fruit, my heart.
–Margaret Simon

For some reason, this poem made me think of my oldest son. When we became a family, one of the first things he wanted to know was whether he could play on football team. I'm not a huge fan of people banging their heads against other people's heads, but he love, love, loved football, and for many years, football was how he defined himself. And he was really good at it. I rarely saw him without a football in his hands

School was never that easy for him, and he hated it. His dream, though, was to play in the NFL and so he knew he had to go to college. He started at a junior college, and promptly tore his ACL. He never played again.

Without football, he is lost. For the past three years, he has just kind of bounced from meaningless job to meaningless job. Today he quit another one. Evenings, he fills the emptiness with various forms of substance abuse.  And I don't know how to reach him or support him, or help him get back on track.


"I Knew You By What You Held"
Footballs. Forever.
But now nothing. Your empty
hands make my heart ache.
(c) Carol Wilcox

This is lovely, Carol. I wish good things to come for your son this coming year, and for you and all the family. Merry Christmas!

Thanks for sharing Margaret's poem which I somehow missed. Hoping that 2017 will be a year of new possibilities for you and your sons. Hoping that you have some downtime to relax and recharge before school begins again.