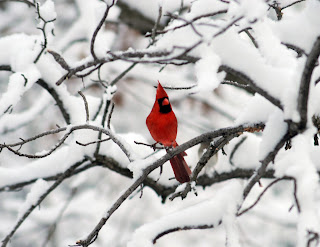 At Margaret Simon's Reflections on the Teche, I found my line. Margaret wrote about a plant on her back porch:

Red is my absolute  favorite color. And I loved the line, "surprised by red." I wondered if there was a time when I had been "surprised by red." And I remembered living in New Hampshire. The winters were so long and cold and snowy. And they lasted forever! I live in Colorado. We have, or used to have, cold, snowy winters, but they are really different. A week of frigid temperatures is often followed by an interlude of days in the fifties. And gray days are followed by brilliant blue skies. New Hampshire winters were endless snow and cold. By February, I was longing for color. One day, I was doing dishes, looking out the window. Four or five cardinals had landed in a tree in my front yard and were feasting on seed that a neighbor had put out. I was definitely surprised, or maybe even astonished by all that red! And there was today's #haikuforhealing! Thank you Margaret!

How fortunate to see the cardinals. They don't live in Oregon and I think they are quite majestic.