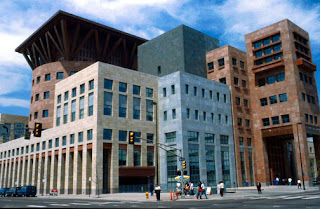 
BACKSTORY: Yesterday, I spent most of my day reading at three different branches of the Denver Public Library. I was struck, at each place, by the many different functions that the library actually serves. I arrived at Barnum, a small branch in southwest Denver, just as the library was opening. There were three elementary aged kids, probably second, third, and fifth grades and several homeless people waiting to get in. Most went right to the computers. Later, I noticed one of the little girls looking at books. As I was leaving, one of the boys was sitting on the steps, eating a sandwich. I commented that it was a nice day to be outside. He just looked at me, "You can't eat in the library," he said. "My mama would get mad if we got kicked out."

The Corky Gonzales branch, that just opened this fall, was crowded with families checking out books and videos, reading, using the computers.

The Central Library was most heartbreaking though. It's a beautiful, beautiful, downtown library. I don't go often because it's really hard to park, but every time I do, I think, "I really need to come down here more often. I needed a book in the YA room, which is right next to what is labeled as a reading lounge, with large comfortable chairs, etc. Every single chair in the YA area and in the reading lounge, probably more than twenty in all, was filled with a homeless person- most sleeping, but a few reading the newspaper, several talking, etc. There was one young man who looked a LOT like my oldest son.  A security guard leaned against the information desk keeping an eye on what was going on, but no one was asked to leave. It was a relatively warm winter evening, probably in the low 40's, but even so, I was struck by the fact that soon it would be 8:00 and the library would be closing, and all of those people would be out in the cold for the night, unless they managed to secure a bed at one of the homeless shelters.
Posted by Carol at 11:46 AM

I'm glad you wrote. Even in my nearby library there are those who stay much of the day. I've noticed because I might stop in in the morning for something, then return later in the day. I'm not surprised about the downtown library, more room, and more down there in that area who need help. Thanks for writing the broader view of libraries, Carol.