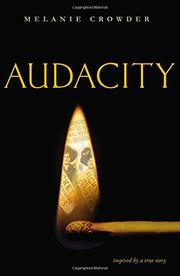 I read a lot of kids' books. A lot. It's not unusual to find a great story. It's much more rare, however, to come across a story where the writing is so good that I find myself marking pages, and thinking, "I have to read that again so I can figure out how this author did this."

AUDACITY by Melanie Crowder (who happens to be from Colorado!) was one of those books for me. This historical fiction novel in verse is inspired by the life of Clara Lemlich, a Russian woman whose family immigrated to the United States at the turn of the century because of religious persecution. Clara dreams of becoming a doctor, but her desire for literacy and learning is sharply opposed by her father, a Jewish scholar, who physically abuses her and destroys her books again and again.

The family is forced to leave Russia because of religious persecution. Clara is sure that when she gets to the United States she will be able to pursue her dreams, but instead, she finds herself helping support her family by working in the garment factories in New York City.  The working conditions are unbearable- doors locked from the outside so women can't get out, workers not allowed to go to the restroom, bosses who violate women by touching them inappropriately. Clara knows these things were wrong and becomes a union organizer.

Clara's story is compelling. And the writing is breathtaking, the kind where you think you have to get a pencil and notebook and write down phrases right away, before you lose them. Here are a few I scribbled as I read:

In this world
Where I am made to be
something I am not,
small,
secret things
wither
inside of me.  (144)

I think
if a man drives his workers
like a slave master
what does it matter
over which holy book
he prays? (158)

All my life
I have been taught
a daughter should be good,
obedient.
That is one thing
I have never been.

But I have been taught
to give
without the thought
of ever giving back
to ease the suffering of others.

That,
I think
I will be doing

I can't wait to book talk this in seventh grade this morning. I know students are going to LOVE this book as much as I did.
Posted by Carol at 4:23 AM