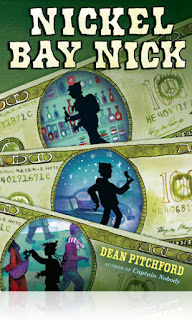 This summer, I'm trying to catch up on the books, especially middle grade and YA novels, that I missed during the school year. One of the books on my list was NICKEL BAY NICK, winner of this year's CYBILS middle grade novels. After finishing it this weekend, I can't believe this book has not gotten more attention from my blogging and book loving friends. It's terrific.

Sam Brattle, the eleven-year-old narrator, lives with his father, a bakery owner, in Nickel Bay, a town that's dying. Sam's father was the town football star, but Sam, who had a heart transplant when he was three, is an under-sized, pasty skinned kid, who can't do sports at all. He has been befriended by Jaxon and Ivy, two eighth graders who eat lunch in an area for kids with health issues. The two entertain themselves by committing acts of shoplifting and vandalism, and Sam has joined them in their antics.

When the book opens, it's Christmas, but Sam is not having a good one. The bakery is struggling and Sam's father only has money for the essentials- things like socks and underwear. Sam has been looking forward to a trip to see his mother, who left to seek her fortune as a singer, but he's just learned that trip is not happening, because his mother, recently married, does not think it's a good time for him to visit. In his anger, Sam vandalizes an abandoned train station, then attempts to hide from police by climbing a tree in a wealthy neighbor's yard. Sam's fall from the tree causes major property damage, and he's pressed into working in the old man's house.

Mr. Wells, it seems, has secrets of his own. For the past several years, the town has been visited by a unknown benefactor known as Nickel Bay (Saint) Nick. Nick distributes hundred dollar bills in the weeks before Christmas. This year, though, Nick hadn't show up, and on his first day of work, Sam learns that it's because Mr. Wells, a retired government CIA type guy and also the secret benefactor, has a broken leg and was unable to pass out money He wants Nick to help him with his red, green and white missions in the twelve days after Christmas.

A likeable main character, some intrigue, lots of feel good. I'm thinking this would be a good end of November, beginning of December read aloud in fourth or fifth grade, maybe followed by some pay it forward kind of deeds to start the new year in January. It's set at Christmas, but the major emphasis is really the choices people make and the good all of us can put into the world.

This sounds like an interesting book. Thanks for sharing!