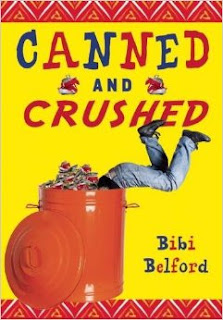 Sandro Zapote is a kid I know well. He's a Mexican immigrant, bilingual, a fourth grader who lives with his dad, mom, and younger sister, Girasol. Sandro's father was an engineer in Mexico and was hired for a similar job in the United States. The job fell through at the last minute, so now he works two jobs, picking up roadkill, and also scrap metal. His mom is a cleaning lady. Sandro loves drawing and soccer, but school, not so much.

Sandro is in trouble. A lot. For starters, he is in an ongoing war with a Pakistani classmate-- Abiola Kahn. He really is pretty mean to her, and actually spends several days in the office in in school suspension for bullying. He also is a little impulsive; when the book opens, for example, he's just been to the principal's office for spitting off a third floor balcony. Unfortunately, when he tried this, the principal was directly below him.

Sandro, however, also has a really good side. His best friend, Miguel, has only been in the United States for about a year, and Sandro serves as his unofficial English tutor. Early in the book, the Zapote family learns that Sandro's little sister needs heart surgery.  Girasol and her mother travel back to Mexico for the surgery, and Sandro is left with his father.  Determined to help his parents raise money for the surgery, Sandro launches a one-man recycling operation at his school. At the same time, he's trying to keep up with school work, play soccer, and take care of the cooking and cleaning at the family's apartment.

This is a book my students are going to love. Short, funny, and lots of real life issues.
Posted by Carol at 5:49 AM

Hi Carol, Thanks so much for your great review and recommendation! I am just now updating my website to include contact information so your students can write to me. bibibelford.com I would love to hear from them. Also, since my publisher wasn't able to include interior art, my students were dismayed to discover there is no picture of the heart Sandro drew for his calendar page! I encouraged them to draw their own and send it to my publisher.