LOST IN THE SUN- Lisa Graff 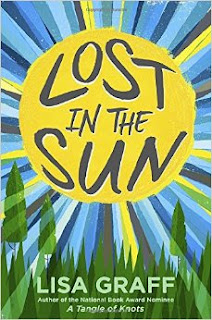 Think I have just found a perfect read aloud to recommend to fifth and sixth grade teachers. Trent is a sixth grader, just starting middle school.  In many ways, he's a typical sixth grader, the middle child in a family of three boys. His mother and father are divorced, and Trent lives with his mother, but sees his father three night a week and every other weekend. His father has a new wife and a new baby. Trent likes sports, but school, not so much.

In one way, Trent is not a typical middle schooler. He's killed a classmate. During his fifth grade year, in a pickup hockey game, Trent hit Jared Richards in the chest with a puck. Jared had an undetected heart defect and the hit killed him. Trent is overcome with guilt and sadness, which often comes out as rage.

Because of the incident, Trent has basically been ostracized by other students in his small town. Just before middle school starts, he is befriended by Fallon Little, a girl with a mysterious scar on her face. At first, Trent resists Fallon's attempts, but soon he discovers that she really is a terrific friend, interesting and lots of fun to boot.

There is so much to love about this book. I love Graff's characters- Trent, Fallon, his mom, his older brother, Aaron, who tries to be the man and take care of his mom and younger brothers, his younger brother, Doug- full of pranks that never quite come off and of course, Fallon. I love the possibilities for conversations- friends, divorce, step parents, grief. And of course, I love the story.

I can't wait to share this book with teachers and kids.
Posted by Carol at 8:42 AM

It's on my list, among the many, but I'm sure I'll get to it this summer, Carol. Thanks for the review!