COURAGE HAS NO COLOR 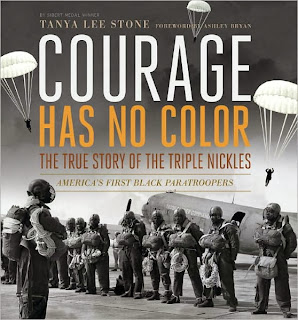 Most people know about the Tuskegee Airmen. Far fewer know about the Triple Nickles, America's first Black Paratroopers. The Triple Nickles started in Fort Benning, Georgia, in 1943. Walter Morris, a black serviceman, was the leader of a group of black soldiers assigned to patrol the base where white paratroopers trained. His men were bored and morale was low, so Morris decided to train his soldiers to be paratroopers. At that time, black soldiers spent most of their days digging ditches and cleaning latrines- very few were actually trained or treated as soldiers. Later, attempting to gain more of the black vote during a bid for re-election, Franklin Delano Roosevelt endorsed the Triple Nickles and allowed them to receive actual training.

This book is disturbing in so many ways. The Triple Nickles never actually got overseas. Instead, they were sent to the West Coast, where they spent their time as smoke jumpers searching out balloon laden bombs, sent over by the Japanese. Despite their elite training, they were reduced to riding in the back of military buses, sometimes, behind prisoners of war. The Triple Nickles were never allowed to eat in Officers' Clubs.

This is a really interesting book. Tanya Stone cares deeply about this subject and spent almost ten years researching and interviewing members of the Triple Nickles. The book contains lots of actual photographs and interviews. It's not an easy read, but would be a terrific gift for a World War Two buff or as a read aloud (probably selected chapters) in a high school history class. 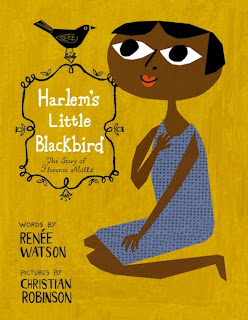 Florence Mills was a little known singer who chose to use her talent as a voice for Black Americans.
Like many Americans living during that time, Florence faced discrimination from a very young age. As a teenager, Florence was invited to perform at a fancy theater. When she got there, she discovered that it was a "Whites Only" audience and her friends would not be allowed to watch her sing. Florence walked away. The theater manager begged her to come back and snuck her friends in.

Later Florence's family moved to NY,  and Florence was part of the Harlem Renaissance movement along with Langston Hughes and Duke Ellington. She was invited to perform in London,  but on the ship people would not eat in the dining room with her and her troupe. Some people said that they wouldn't come to see black performers on the stage

After returning from London, she was invited to be the first woman to star in the Zielfield Follies. This was "Every performer's dream but she turned it down. Instead she chose to use her voice in shows that gave unknown black singers and actors a chance to perform onstage."


SOMETHING TO PROVE: THE GREAT SATCHEL PAIGE VS. ROOKIE JOE DIMAGGIO

"To see how good he is,
he he has to face the best,"
said Barrow.

That's when Satchel Paige got the
call. "Can you come north?" the
scout asked. Satchel had been
barnstorming the entire winter
in Souther California.
Never one to turn down
an opportunity to pitch,
Satchel accepted the invitation.

DiMaggio went one for four that day. Essick sent a telegram, DIMAGGIO ALL WE HOPED HE'D BE. HIT SATCH ONE FOR FOUR. Phillies manager Connie Mack said he'd pay Satchel one hundred thousand dollars (top dollar in those days)… if he was white. Di Maggio said Paige was "the best and fastest pitcher he ever faced." DiMaggio went on to play in the majors for many years. Paige didn't actually pitch there until twelve years later, a year after Jackie Robinson, when he was 42 years old.

DiMaggio was elected to the hall of Fame in 1955. Paige had to wait sixteen more years. And even then, there was a debate about whether Negro League players should have their own separate wing.

Sometimes living in the land of the free just kinda takes my breath away.
Posted by Carol at 5:37 AM