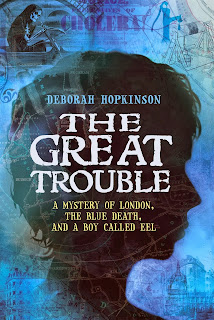 I love historical fiction. I love a good mystery. And I love Oliver Twist.

Deborah Hopkinson's THE GREAT TROUBLE: A MYSTERY OF LONDON, THE BLUE DEATH, AND A BOY CALLED EEL fills the bill on all accounts.

THE GREAT TROUBLE is the story of a cholera epidemic that occurred in London in 1854, as told through the eyes of a street urchin named Eel.  At the time, people believed that cholera was an airborne disease, but through careful detective work,  Dr. John Snow, was able to prove that the germ was ingested via mouth, in this case, a contaminated water pump. In the actual epidemic, over six hundred people died.

When the book opens, Eel is a former mudlark, a street child who makes his living by digging copper pipe and other treasures from the banks of the smelly Thames River. He has recently been employed as a saloon boy at the Lion Brewery, and also does side work, sweeping up for Mr. Griggs, the tailor across the street. Additionally Eel cleans animal cages for Dr. John Snow, a doctor/researcher/ scientist. Eel is desperate for money, he needs to make four shillings a week to pay off a secret debt.

And as with any Dickensian novel, there is a bad guy. Eel is hiding from Fisheye Bill Tyler, one of the nastiest villains imaginable. There is also a bully named Hugzie, the nephew of the tavern owners.

Trouble comes to Broad Street. Hugzie accuses Eel of stealing from the pub. Eel goes to Mr. Griggs to verify that he is making his money honestly, and finds him in the last stages of cholera, called "the blue death," because victims become so dehydrated that their lips turn blue.

Soon others on Broad Street become ill and Eel goes to Dr. Snow for help in treating his friends and neighbors. Dr. Snow can't help people who have already fallen ill, but he is anxious to discover the source of the disease, and enlists Eel's help. Together, they attempt to put together the pieces of the puzzle and solve the mystery of the Blue Death.

In a recent Nerdy Book Club post, "Why I Wrote THE GREAT TROUBLE," Hopkinson says she wrote the book for fourth graders, I definitely think it would be appropriate there, I can see myself using it as a read aloud to introduce the genre of historical fiction. I also think, though, that THE GREAT TROUBLE will be a really engaging read for older students, and I will be including it in a book talk for sixth graders this morning.

This is a great review! I've been looking for a great historical fiction book to read aloud to my 4th graders! Thanks for the suggestion.

Yes, I look for the back matter, hoping it's there, Carol! I do want to read this book, am fascinated by books about plagues, etc., and know this must be a good one! Thanks for the great review!

Oh, this sounds like a magnificent choice for our HF genre study,Linda. Such an interesting time period to study, as well, and one that there are not enough books written (I think). So, thanks for this!

Carol, I meant!!! I guess I'm not out of my turkey stupor yet!

Wow, this one sounds like my kind of book. I love historical fiction. Will check this one out. :)