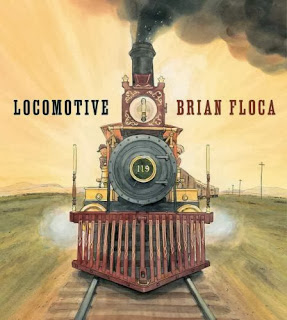 I wish I had a younger niece or nephew to buy for this year, because I know what book they'd be getting. LOCOMOTIVE by Brian Floca is a CYBILS nonfiction nominee. It's also won a ton of other awards, including six starred reviews and a place on the New York Times Best Books of the Year list.

LOCOMOTIVE traces a family's journey from Omaha, Nebraska, all the way to Sacramento, California, almost like four stories rolled into one. First, beginning with the gorgeous front pages, the book is a tribute to the builders of the Transcontinental Railroad. Second, there's a ton of information, both in the text and in the illustrations, about the workings of a locomotive- including the parts of the engine, and the people who make it go.  There's another story about what it would be like to ride on a train- the conductor picking up tickets, the "butch" peddling newspapers, fruits and candies, and "all the cigars" you can smoke, the "convenience" for when you have to go to the bathroom ("don't wait for the train to stop- it's rude to use the toilet when the train is sitting at a station). Finally, the book is a travelogue- with scenery from Omaha, the Platte River Valley, Wyoming, Castle Rock, (Colorado!), Donner Pass, and into California. The pictures of a rickety bridge, tunnels,  and steep inclines are so realistic the reader feels like she is right there on the train.

Listen for the engine
for the mighty locomotive
She's waiting in the railyard,
ready for her work
Hear the clang of the bell,
hear the huff of the engine--
for her crew is bringing her out!
(and then embedded in the picture)CLANG, CLANG, CLANG
CLANG, CLANG, CLANG!
See a puff from her staci--
a puff of smoke, a smudge in the sky.

See a puff, a smudge, a cloud…
a storm!
NOW COMES
THE LOCOMOTIVE!

I picture myself on Christmas afternoon, with four-year-old Gregory, a lover of trains, nestled against my side, sharing this story, making train sounds. I know he wouldn't let me miss one word, either of the text, or the captions that accompany the illustrations  I see Gregory as a six-or-seven year old, poring over the illustrations, asking a million questions about how trains work, what would happen if the train really did blow up, would it be scary to go across the bridge. I imagine him as a nine or ten-year old tracing the journey of the transcontinental railroad on a map. Even now, I can see my 25-year-old history buff nephew loving LOCOMOTIVE.

LOCOMOTIVE, by Brian Floca, should definitely be on your Christmas list. I can see myself buying several copies, for the train and history lovers on my list. There will definitely be a copy for my school, and maybe even one for me!
Posted by Carol at 4:29 AM