I really wanted to be at NCTE in Boston this weekend. Since I wasn't, I drowned my sorrows by reading. I finished an adult novel for book club, then read two chapter books that I have been wanting to read since last summer. 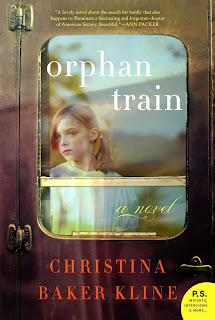 ORPHAN TRAIN by Christina Baker Kline is an adult book (but could easily be read by a middle school reader). Seventeen-year-old Molly is growing up in the foster care system in Maine. When she steals a copy of JANE EYRE from the library, she is sentenced to fifty hours of community service with Vivian, a 91-year-old woman who needs her attic cleaned. Molly doesn't expect to enjoy the experience, but soon discovers that she and Vivian, who was part of the Orphan Train from New York to Minnesota as a young girl, have much in common. Alternating chapters tell the two women's stories. 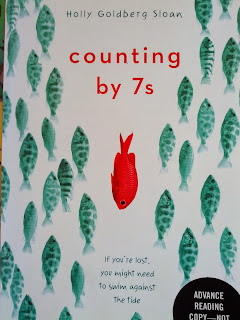 COUNTING BY 7's is a story about another orphan. Willow Chance is a very gifted (genius) twelve-year-old, who finds herself an orphan after her parents are killed in a car accident. Through a series of "chance" encounters, she is taken in by Pattie, a Vietnamese woman who lives in a garage behind a nail salon, and her two teenagers, Mai and Quang-Ha. Willow and Quang-Ha are both under the care of a less than competent school counselor, Dell, who also becomes part of the Willow's extended family, as does Jairo, a taxi driver. Sloane has done an amazing job knitting together the lives of these quirky characters; I cried at the end of this story. 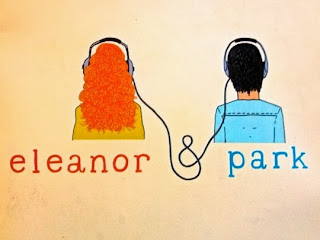 Last night, I read ELEANOR AND PARK, another story about a brave young woman, growing up on her own. Eleanor is in high school. She's overweight, has a mop of red curls, and wears Goodwill clothes that never quite fit. When the book opens, Eleanor has just moved back in with her family- her mom, an abusive stepfather, and four younger siblings (who are all sharing a bedroom). On the bus to school, Eleanor begins a relationship with Park, a Korean boy who has a loving family, but never quite feels like he fits in either. A teenage love story with a shocking ending. I can think of so many middle schoolers who need this book.
Posted by Carol at 7:52 AM

I loved the last two, & hope many kids get the 'chance' to read them! The first one sounds wonderful Carol. My mother told me she remembers the trains coming through their small town in MO & she was scared that it might happen to her, & a family friend's mother was one of those orphans. Hard to believe it really happened, isn't it?