A SPLASH OF RED- THE LIFE AND ART OF HORACE PIPPIN 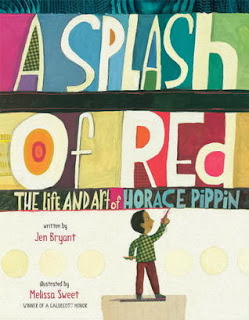 As a CYBILS judge, I get to read lots of terrific books. As a nonfiction judge, I learn lots of new and interesting things. By the time the CYBILS judging is over, my mind will be bursting with trivia. Did you know, for instance, that the sea otter has over one million hairs per inch, the densest hair of any animal on the planet? I didn't know that, or at least I didn't know it until this weekend.

I also get to learn about lots of fascinating people. This weekend I read A SPLASH OF RED, Jen Bryant's newest book (she also wrote RIVER OF WORDS, about William Carlos Williams). Pippin was an African American artist, born in 1888. As a child, he loved to draw; some of his first "real" art supplies came from winning a contest when he was nine or ten. Pippin's father abandoned his family  when the boy was a young teen, and Horace dropped out of school to support his family. Shot in the arm during World War I, he could no longer draw as he previously had, so he found a new way, using a charcoal and a hot poker, and old house paint he found in alleys. Later he was discovered by Andrew Wyeth.

Jen Bryant's story is paired with Melissa Sweet's art. A note in the back says that the two actually worked together on the book, which seems a fairly unusual process. Sweet embeds facts from the story, as well as quotes for the artist, into each illustration. "Pictures just come to my mind and I tell my heart to go ahead." Sweet made sure to include Pippin's trademark, "splash of red," onto each page. Her illustrations are playful and lively and lots of fun!

A fabulous collaboration by a terrific team!
Posted by Carol at 3:04 AM

Hi, Carol. Thank you for this review. "River of Words" is one of my favorite picture book biographies. I'm looking forward to checking this one out -- I love Jen Bryant's work.