POETRY FRIDAY- A POEM AND A PICTURE BOOK 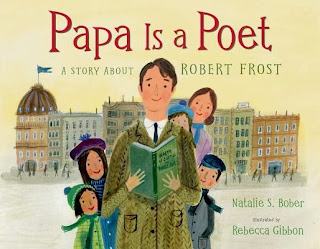 For the last few weeks, the weather in Colorado has been absolutely glorious- warm, goldredorange trees, blue forever sky-- absolutely perfect. This week, though, it's gotten much, much colder. Earlier in the week we had drizzle and frost, and now wind, so now the trees are pretty much bare. At this time of year, I always think of Robert Frost's "Nothing Gold Can Stay."

"Nothing Gold Can Stay"

Nature's first green is gold,
Her hardest hue to hold.
Her early leaf's a flower;
But only so an hour.
Then leaf subsides to leaf.
So Eden sank to grief,
So dawn goes down to day.
Nothing gold can stay.

I love Robert Frost. He's such an icon in American poetry that I kind of assume that he was always that well-loved and successful. There was a time in Frost's early life, though, when he struggled to find his voice, to be accepted, and to get his poetry published. A new picture book, PAPA IS A POET, chronicles that time.

PAPA IS A POET, narrated from the point of view of Frost's oldest daughter Leslie, tells of a time, when Frost "longed to be where he could lose himself among strangers, to write poetry without further shame to friends and family who looked upon him as a disappointing failure." Frost actually moved his family, his wife and four children, to England for two and half years. It was after that time that his poetry started being published in America.

I love the format of this picture book biography. It reads like a story, but lines from poems, quotes, and other facts about Frost's life are embedded throughout. The end matter contains an author's note about this time, a few photographs of Frost and his family, and more famous quotes. My favorite:

"We go to school to learn what books to read for the rest of our lives."

And then, as if all of that were not enough, there are twelve Robert Frost poems, including Nothing Gold Can Stay, Birches, Mending Wall and The Pasture.

A lovely addition to any poetry library.

Thank you for introducing me to this book, Carol! I love Frost's poetry and I'm intrigued to know that a famous and successful poet as Frost struggled at one point. Gives us all hope, doesn't it?

Sounds like such a great book! Thanks for sharing it.

Oh, I had forgotten about this-read about it somewhere else. I lately read the book about Frost, The True Story of Charlotte's Web-loved it, but I don't recall they related much of this struggle. I hope I can get the book soon-love Frost as you do Carol. BTW-I just signed up for your presentation at CCIRA-do you think you'll have time for lunch or ? I'd love to if you can!

I feel as though I've just touched the tip of the ice berg re: Frost's poems -- so much to admire. I think Jama is the one who also wrote about this book? It sounds excellent.

I'm going to be on the lookout for this book. Sounds fascinating. Thanks for the review.
Violet N.

On my Must See list (which probably will mean Must Buy!)

On my Must Buy List, too! The hotographs from this period in Frost's life are interesting - for all the discomfort and worry, there is a sense of purpose and determination in his eyes. He knew he was a poet.