Back story- Yesterday, I had a dentist appointment after school. It was in Thornton, a rapidly expanding suburb north of  Denver. After the appointment, I pulled out of the parking lot, and the woman in front of me stopped right in the middle of the road, so quickly that I almost rear-ended her. I couldn't figure out what she was doing and just kind of sat there waiting for about a minute (even though I was tired and hungry and really wanted to honk). Finally she pulled forward and all of a sudden I could see what she was doing. There were five huge turkeys (at least I think they were turkeys) perched on top of the chainlink fence right next to the road. I sat there and looked at them for as long as I could, and then drove around the block, so I could pull over  look at them again. And I had a million questions-- were they wild turkeys? Why were they just sitting on the side of the road like that? It didn't look like they were in a pen, but maybe they were, and I just couldn't see it. What was that silver thing in the yard? Was it some kind of a feeder? Did the turkeys stop there often? I really wanted to go up and knock at the front door, but I refrained myself.

As far as form, I tried a doditsu, which I learned about at the Miss Rumphius Effect. They are supposed to be humorous (maybe this is a little) about work or love (not really, but…) And I tried using the title as part of the poem, like two of my favorite poets, Mary Lee Hahn and Amy Ludwig Vanderwater, often do. I don't think I quite pulled it off but... 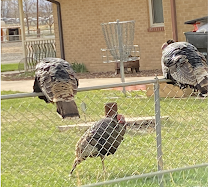 But these November nomads

WOW! What a curiosity -- turkeys on a FENCE?!?! I LOVE your dodoitsu! Perfect word choice, fun alliteration, and a title that does good work!

We saw an amazing bird sight on 4/14, too! We had finished an extra long delivery for the Clintonville Resource Center pantry, and as we drove out of the back parking lot, where the alley met the street, there was a Cooper's Hawk mantling over/wrestling with...what IS that?...a PIGEON almost bigger than it! The hawk was trying valiantly to make its kill. The pigeon was trying valiantly to escape. A delivery truck came from the alley across the street and carefully turned toward the action. It was too much for the hawk. But that gave me a chance to plastic-bag-hand carry the (oh my heart -- whimpering) prey up into the yard of the church where we hoped the hawk would return, finish off the pigeon, and eat like a king. Cycle of life. The pigeon died so the hawk could live. So amazing to see it right there in front of us.

At first, I thought you were going to tell that the woman had turkeys in her car. That would be something! But I wonder if the people in that house do feed them. You posed some great questions, Carol, & I'm glad you told us your story of turkeys, no bunnies at all! Happy Easter!