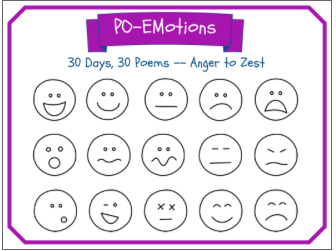 April is National Poetry Month. Every year, my dear friend (and poet Extraordinaire), Mary Lee Hahn chooses a theme, and writes a poem each day. Mary Lee blogs and posts her poems at two different places- YEAR OF READING and a fabulous new poetry blog POETREPOSITORY

This year, Mary Lee has chosen the theme, "PO-EMotions," and will be writing about a different emotion each day. She promises, "This year, I will write a poem a day that either evokes an emotion, or uses an emotion word in the title or body of the poem." If you want to read more about the emotions she will be touching on, go here.

I wish you would come
to my school
and sit next to
that little kindergarten guy
you know, the one with the chocolate skin
and sparkly brown eyes
who has never even met his daddy
you could read him a story
he would love it
if you showed up every week
or even a couple of times a month

I wish you would show
at the neighborhood basketball court
you know, the one across from the post office
where the middle schoolers hang out
from sun-up to sun-down
you could shoot hoops
maybe even organize a team
teach the kids what it means
to work as a team,
to pass instead of shoot
to commit to showing up at practice
to persevere when your team
is losing by a whole lot
help those adolescents understand
that not many black men
are professional athletes
and that most of them who are
got there by a whole lot
of practice and hard work
and they took care of their business
at school too

dear mr. activist
i totally agree with you
that things need to change
but sometimes
I wish you would remember
that the smallest things
matter most

Carol, This is so powerful. I love the images you pile up so show the power of those smallest things that make all the difference in the world. It is easier to learn from a live person rather than a YouTube video.

So much truth here.

Maybe it would be good to send this to the newspaper, Carol? It's very powerful.