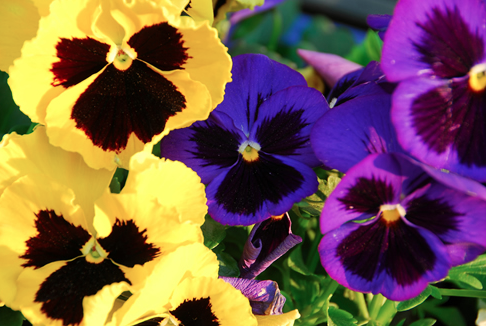 April is National Poetry Month. Every year, my dear friend, and Poet Extraordinaire, Mary Lee Hahn, chooses a theme and writes a poem every day. She blogs and posts at two different places- YEAR OF READING and her fabulous new poetry blog, POETREPOSITORY.
This year's theme is PO-EMotions. Mary Lee promises, "I will write a poem a day that either evokes an emotion, or uses an emotion word in the title or body of the poem. Her list of emotions is here. I'm joining her, at least some days.

no flower
is more optimistic
than Miss Pansy

she lifts her face
skyward

*****
Another really long day. I came home and wrote the pansy poem and wasn't very happy, but couldn't think of another poem. At ten o'clock, as I was waiting for the dog to come in so we could go to bed, I had a completely different idea.  Here's that one.

Today
I stood in front
of two classes of fifth graders
about two weeks
into a Civil Rights unit.
This week they are learning
about Brown vs. Board of Education,
Topeka, Kansas, 1954
and the teacher asked
if I would demonstrate
how to embed facts into poetry.

We read an article
about Thurgood Marshall
his father William
was a railroad porter
who loved the US Constitution
and debated court cases with his sons
every night at dinner
in high school, Marshall memorized
the US Constitution as punishment
and later on, he studied the Constitution
as a law student at Howard University
We talked about how
Marshall's tenacity
and his courage
and intelligence
had led to enormous changes
for African Americans.

And then tonight
I attended a neighborhood rally
last Saturday
a twenty-two year old
father of two
was gunned down
about two miles from my house
as he walked from his house
to a church down the block
to attend his uncle's funeral
there were five related shootings
in the neighborhood that weekend.

I stood at the rally
listening to a City Councilman,
the heads of several youth organizations,
and the chief of police,
the aunt of the boy who was shot
and watching as four Crips
dressed in hoodies
and sagging pants
with blue bandanas
hanging out of their pockets
made a ring around the back of the rally
their eyes were flat and dull
there was no sparkle

And here, also, you capture two sides to the same coin.

So sad to hear that the violence is going on in Denver, too. What is happening to our world???

Follow up to yesterday's rally:
More sad news. Last night, there were three shootings. One at 33rd and Krameria (Bloods territory) and then two more within a block of the rally (Crips territory). One person confirmed dead. So sad. So scary.