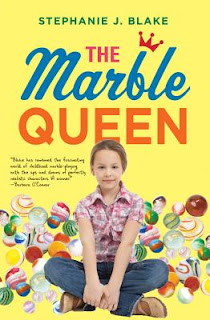 Several weeks ago, I stumbled across THE MARBLE QUEEN somewhere in kidlitosphere. The book was endorsed by Barbara O'Connor, so right there, that was a good sign for me. I put my name in a book give away, and I WON! January 1, 2013, I won something! Seems like it ought to be a good omen to win a book the first day of the new year. And when the book came, I discovered something even way cooler! Stephanie J. Blake is a COLORADO author. She lives in Castle Rock, which is about 30 minutes south of me! We're almost neighbors!

THE MARBLE QUEEN, set in 1959,  is Blake's first novel. The main character,  Freedom Jane McKenzie, is the best mibster (marble player) in her grade/neighborhood, and wants to enter the Autumn Jubilee Marble Contest, and win the $100 first prize, but her mama,  Mrs. Wilhelmina Ann McKenzie, says that Freedom Jane is too old to be playing marbles with the boys. Freedom isn't ready to give up her dream. On top of that, Daniel, who has been her best friend for years, doesn't want to play with her any more, because she is a girl. And then her daddy, Homer Higginbotham McKenzie, is drinking way too much beer, which makes her mom angry.

This book will, of course, raise the hackles of all your ten year old feminists. I suspect there will also be more than a few discussions about the friendship between Freedom and Daniel. How can someone who has been a friend forever all of a sudden turn his back on his best friend?  I also can think of a number of kids whose family members struggle with alcoholism or other kinds of addiction. I know I will hand this book to them, just to say, "Other kids have been there too."

When I finished reading the book, I had a great idea. Since we are practically neighbors, I thought it would be fun to host a little author party, right here at Carol W's Corner.  I asked Stephanie if she would be open to answering a few questions, and she graciously agreed. Please join me, then, in welcoming Stephanie J. Blake to my blog.


Talk about your process. How did this book come to be? How did it get published?
The idea for the story came to me one Sunday while I was reading the paper. I was fascinated by an article about a group of old men who were reminiscing about their time as mibsters when they were children in the 1940’s and 50’s. Back then, marble competitions were sponsored by newspapers and children could win scholarships and cash prizes for becoming The Marble King. There weren’t many girls playing back then. I did some research and the story grew from there. It took about two years to write it.

All told, it took me six years to get The Marble Queen published. I had about 13 rejections and have saved each and every one. The manuscript actually sat in the slush at Marshall Cavendish for almost a year before my editor emailed in April 2010 to ask if it was still available. I did a revision pre-sale and got the offer on June 10, 2010. The book came out to great reviews December 18, 2012.

How do you know so much about marbles? Were you a marble player?
I was not a mibster growing up. I am self-taught and have a pretty good spin shot! I have been collecting marbles for a few years. I have some special antique marbles that were found in thrift stores.

Who is Freedom? Is she based on anyone you know?
Freedom Jane was a name I’d picked out if I ever had a girl. Alas, my husband and I have three boys. Freedom is probably a lot like I was at ten—very headstrong, curious, smart, and a total tomboy.

How did you choose 1959 as the setting for the book?
The late 50’s are a magical time to me. I’d love to go back in time and wear bobby socks and poodle skirts. I set the story in 1959 because I wanted my characters to have innocence all around them. I didn’t want segregation issues or war time to complicate the story. I really wanted to explore early feminism and alcoholism.

Are there any instances in the book that are autobiographical, e.g. the fight on the first day of school, or dropping the collection plate, or being thunked on the head?
My mother used to wear a thimble on her finger when we acted up in church! I loved to skate when I was a kid, and I always coveted white leather skates with pink pompoms on the laces, but I never did get a pair. I fed my brother a worm once, and got into some awful trouble over that. My mom used to make zucchini slaw, and I just hated it.

Friendships between girls and boys can get pretty hard around Freedom's age. Has this come up in your own life? How did you decide to make Freedom's best friend a boy?
As a girl, my best friends were usually boys. I had callouses from swinging on the monkey bars and I played sports. I didn’t care much for Barbie. My hair was always a mess. I was also close with my little brother, and we spent a lot of time playing together outside or on the playground across the street from our house. We moved around a lot, and I just didn’t identify with other little girls and the games they played.

So many kids I know struggle with family members who are alcoholics or drug users. I love that you showed Freedom's relationship with her father in the complexity that usually exists. Freedom clearly loves her dad, and he's not a bad guy at all. Talk a little about your thinking regarding that part of the book…
Freedom’s dad, Homer, is a complex character. He has these dreams and aspirations but can’t get out of his own way. Drinking is his escape. I wanted to be very careful and not make Homer a bad person when he drinks. Unfortunately, he is a weak man. Mama can’t stand weakness in anyone.

Freedom has picked up on that. It’s the breaking of Mama’s rules that worries Freedom more than the actual alcohol use. She has unconditional love for Homer, even though he continues to fall short and disappoint Freedom. My editor and I were more worried about how Mama was portrayed. In early revisions, I had to soften Mama up to make her more likeable.

I know a little about you from the cover, and from your website. I know that you live in Colorado, and have three sons, and love to bake. Do you write full time? If not, what do you do for your “day job?” When and where do you find time to write?
I am a full-time mom and part-time writer. While I have a dedicated office area on the main floor of our home, I struggle with writing. Sometimes I write for days, but sometimes months go by and I don’t write a thing. In the summer, I love to go fishing. I’d rather go fishing than write any day of the week.

What is next on the agenda? Do you have another book in the works?
I am working on a companion novel to The Marble Queen. It's set in April of 1971 and will be Barbara Jean's story. Freedom will be college-aged and Higgie will be a difficult teen. Some themes will be alcoholism, Vietnam, first crushes, and divorce.


Stephanie may be hosting an author signing in the near future at one of our local bookstores. If so, you know I will be sitting in the front row!
Posted by Carol at 8:41 PM

Thanks for this lovely post. I'll keep you posted on events and such.

Great questions, Carol! It was wonderful to read your exchange.

13 rejections... wow! That gave me pause since I just finished revising the picture book manuscript I've been working on for the past 14 months today. I have a long road ahead of me, don't I?

Congrats on winning the book!

I really enjoyed reading this. I remember my brothers playing marbles and having real arguments when they lost their favorite "shooter" in game. Now I'll have to read the book. Happy New Year!!

I just started reading, so will return to read this post when I've finished. So far, a few chapters in, I love it, Stephanie! thanks for telling about it, Carol.

for 10 year old feminists!! :) would love to read it..
visiting from Teach Mentor Texts

Thanks all for reading!