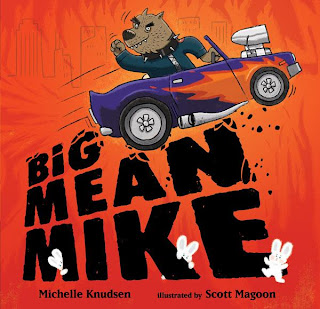 "Big Mean Mike was the biggest toughest dog in the whole neighborhood. He had a big mean bark. And big sharp teeth. He wore a big black collar with gleaming silver spikes and his claws were big and mean and very, very pointy."

"Best of all he had a big mean car that he liked to drive around the big mean streets. It made a big mean sound whenever he revved the engine."

The next day, he reaches into the glove compartment for his gym pass, and finds two tiny fuzzy bunnies. The day after that, there are three fuzzy bunnies sitting on the hood.

That weekend, Mike heads to the monster truck show. When he gets there, he discovers four fuzzy bunnies under the seat of his car.  Now Big Mean Mike faces a huge dilemma. He can't leave them in the car, because there are too many tough characters hanging around. At the same time, he doesn't want to ruin his tough guy image by being seen in public with a bunch of tiny fuzzy bunnies. How will Mike respond?

This is one of those pick it up in the bookstore, laugh out loud, and know right away that kids from 8 to 80 are going to enjoy it. Big Fun! At the same time, I can see a million different reading/writing/life lessons. It would be perfect in a mini- lesson on how an author uses actions to reveal character. It would be terrific for a lesson on how characters change. Or if I was teaching theme, I could use it with other books like THE RECESS QUEEN, EACH KINDNESS, and Patricia Polacco's BULLY to talk about life lessons.

Definitely one of those perfect, gotta-own-this-one picture books.
Posted by Carol at 6:22 AM