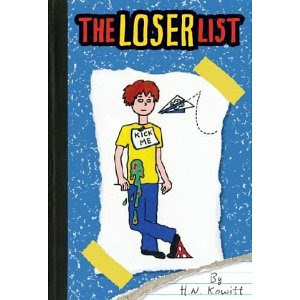 As far as our fourth, fifth, and sixth graders are concerned, the WIMPY KID series is where it's at. They read these, and reread them, and reread them. I have no problem with this series. I'm delighted kids are reading. I'm glad they have found an author they love. I don't care if they read them over and over again. The trouble is, there are only five (I think that's right?) of them, and at some point, I need to be able to hand them another book.
Enter the just-published THE LOSER LIST. Format wise- it looks a lot like DIARY OF A WIMPY KID, similar font, and lots of illustrations throughout. The main character is a sixth grade kid, Danny, an artistic, comic book loving, kind of "geeky" kid who learns that his name is on the "Loser List" on the wall in the girls' bathroom. He and his best friend, Jasper, sneak into the bathroom to try to remove their names, but Danny is caught, and must spend a week in after school detention.
In the detention room, Danny becomes linked up with a group of the school's resident "bad boys." This gang is impressed by Danny's ability to draw cool tattoos with a sharpie, and Danny becomes a pseudo- member of their gang. He enjoys his new-found status until his "buddies" steal a valuable comic book from one of Danny's friends, who owns a comic store.
I think this book is going to be a huge hit with our intermediate grade kids. First, they are going to love that "Wimpy Kiddish" format. Danny is a likeable main character, struggling with intermediate grade issues- identity/coolness (or lack of), friendship, peer pressure, etc. I also think they are going to love the ending, which was a surprise, even for me.
Taking this one to school today!
Posted by Carol at 4:07 AM

Me too! I read it last week, but didn't get around to writing my review of it till this weekend. Make room for books with Wimp Appeal!

This looks good. I will have to get it. My wimpy kids are falling apart and I would rather buy something new.