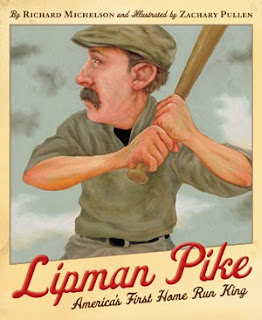 Yesterday was Opening Day at Coors Field. I'm a huge Colorado Rockies fan- in my pre-mothering days I used to have a partial share in season tickets- I went to 25 or 30 games a year. In honor of this special
occasion, I'm presenting a book and poetry companion. Today's topic- BASEBALL!!!!
Lipman Pike was born in 1845-- the same year, according to Richard Michelson, as baseball officially became a sport with consistent rules and equipment. In 1858, the National Association of Base Ball Players was formed.
Lipman Pike's family had immigrated from Holland. His father owned a haberdashery in Brooklyn. He encouraged Lipman and his older brother, Boaz, to play Base, as the game was called then, as a way of assimilating into their new culture.
As a teenager, Lip began playing with his brother's neighborhood club. Word of his power and speed spread through Brooklyn, and when Lipman was 21, he moved to Philadelphia, where he had been offered $20 a week to play for the Philadelphia Athletics. He was the best player on that team, but faced discrimination because he was a Jew. He encountered similar discrimination when he played for New Jersey Irvingtons, and then the Troy Haymakers.
Kids are used to looking at discrimination as it applied to blacks/slavery/the Civil Rights movement. LIPMAN PIKE is a biography that helps kids understand that other groups of people have faced also faced discrimination. It would be great to compare Pike's story with Jackie Robinson (maybe using the picture book TEAMMATES or Kadir Nelson's WE ARE THE SHIP). Richard Michelson provides four pages of end notes with additional information about Pike and also about the experiences of Jewish immigrants. Zak Pullen's character focused illustrations perfectly complement the story.
**************
And because April is National Poetry Month, I went hunting for baseball poems. Of course I could have used "Casey at the Bat" or "Take Me Out to the Ball Game," but I wanted something new and different. I found a site called Baseball Almanac. One page has links to twenty-five or thirty baseball poems. And there was even one about the Colorado Rockies!
Baseball Parks
J. Patrick Lewis
Diamondbacks are safe in Phoenix
Where the ARIZ warm and dry
And the team they COL the Rockies
Plays it cool a mile high.
Read the rest of the poem here
****************
"If School Were More Like Baseball"
Kenn Nesbitt
If school were more like baseball
we'd only have to play.
We'd hang out in the sunshine
and run around all day.
Read the rest of the poem at Poetry4Kids.
If you don't know this site, poke around a bit- kids love it!
*******************************
And this one is in honor of my Ohio Friend, MaryLee and the terrific poem she wrote today.
"End of Winter"
Eve Merriam
Bare-handed reach
to catch
April's
incoming curve.
Leap higher than you thought you could and
Hold:
Spring,
Solid,
Here.
Read the rest of the poem here.
*******************************
"Jackie"
Anonymous
He waited
In the whiteness of the afternoon sun;
Black man on green ground.
He waited
In the silence of the tongue
Black man on green ground.
He waited
In the path of his words
White broke his bones;
Black man on green ground.
He waited
As few men have ever
waited
And endured
Before a multitude
as no man before,
Read the rest of the poem here.
This would be a great poem to pair with TEAMMATES, one of my all time favorite picture books.
REVIEW COPY OF LIPMAN PIKE PROVIDED BY PUBLISHER.
Posted by Carol at 7:34 PM

I'm having one of those mornings. I want to stay home and catch up on blog reading. I feel like I'm whistling in the dark because I never to listen to what anyone else is writing. It's a dangerous mood. I am defiantly ignoring the clock (as I peek at it to see how far I can push this...but we have class pictures today so I guess the game's up)...I need to go get in the shower and race to the PD and copy the papers and teach teach teach teach and crash at the end of the day still never having read much more than one blog...but at least I read this one and I know that ONE person is reading (and liking) my poems -- THANKS!