YUMMY: THE LAST DAYS OF A SOUTHSIDE SHORTY- G Neri 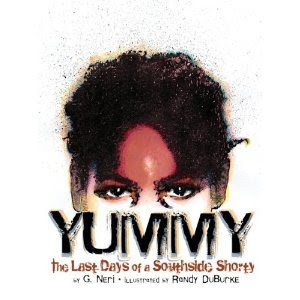 I've spent my entire career in urban schools. And I love them. I love teaching kids who really need me. Kids who haven't heard stories read aloud. Kids who aren't enrolled in umpteen after school lessons and clubs and team . Kids who don't travel every vacation. Kids who need me.

This year, though, has been particularly hard. There is a new hard story every single day. A grieving eight-year-old whose brother died in a drive by shooting at a nearby strip mall. Two little guys being raised by a pregnant teenage sister. A "family" of what seems like twenty people living in a thousand square foot bungalow, with seven or eight assorted kids that come to school and are supposed to function, despite not having slept in beds, or been fed anything that closely resembles nutritional meals.

I believe in books. Believe that they have the power to help kids see bigger worlds. The power to transform. Or sometimes just the power to escape the hard worlds they live in. But I'm having trouble this year finding books that match my kids' lives.

This weekend, I read a graphic novel that I will be taking to school to share with our intermediate grade students. YUMMY: The Last Days of a Southside Shorty, by G. Neri, is the true story of Robert "Yummy" Sandifer," an eleven-year-old gang member, growing up in the projects of Chicago. Yummy was being raised by his grandmother, who was also raising about twenty other grandchildren.

When Yummy was nine or ten, he joined the Black Disciples Nation gang. The gangs liked the younger boys because at that age, the boys could commit crimes, but could not be convicted of felonies. One day, in a street fight gone awry, Yummy shoots and kills Shavon Dean, an innocent fourteen-year-old who hoped to become a beautician. The story, told through the eyes of Roger, one of Yummy's classmates, might help one of my students to make safer, wiser choices. It might help kids or teachers to see a child through different eyes. It might keep one child out of gangs.

Yummy is a book that my students need.
Posted by Carol at 10:22 PM

Right book at the right time,eh?