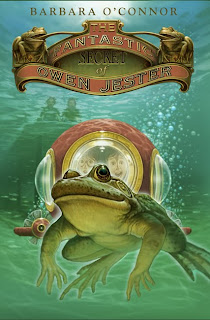 If you asked me to name one of my all time favorite read alouds to use with intermediate grade students, I would not think for very long, maybe a millisecond, before I said, HOW TO STEAL A DOG by Barbara O'Connor. It is, by far, one of my favorite, favorite, favorite read alouds (and I'm not one of those teachers who reads the same books over and over and over again, in fact, I rarely read a book two years in a row).
I couldn't wait, then, to get my hands on Barbara O'Connor's newest book, THE FANTASTIC SECRET OF OWEN JESTER. I've been on the wait list at my library for almost a month, but they only have three copies, and it seemed like it was going to be a while. Tonight, while I was waiting for my son to have his hair rebraided, I broke down and bought it. And am so glad I did. It's terrific!!!!!
Owen Jester's father has lost his job at the hardware store, and the Jester family is living with Owen's grandfather, and his grumpy nurse, Earlene. The house is in a fairly rural area, and Owen has spent two weeks capturing an enormous bullfrog, who he names Tooley Graham-- Tooley for a cousin and Graham for Graham Pond, where the bullfrog was captured. Owen is thrilled to have a pet, but Tooley seems not nearly as happy as Owen.
One night, as the train passes through, Owen hears a mysterious thump. After much searching, he discovers the source of the noise-- a mini-submarine has fallen off of the train. Owen and his friends Travis and Stumpy, along with Viola, the neighborhood know-it-all and pest (not to mention the only one who really knows anything about submarines) hatch a plan to launch the submarine…
I know my intermediate grade readers are going to love this book!
Posted by Carol at 10:22 PM

I just finished reading this, too!

I LOVE all the sensual images she uses! (especially sounds)

I could not agree more! It's books like this that make me wish I were still hard at work as a school librarian. I read it and thought, through the entire story: This would make the BEST read-aloud!
So happy to hear when teachers, with such busy schedules, still have time to read to their kids.