BORN TO BE GIANTS: HOW BABY DINOSAURS GREW TO RULE THE WORLD- Lita Judge 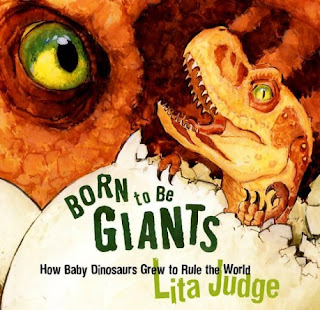 I'm having a prehistoric kind of weekend. Last night I read MAMMOTHS AND MASTODONS, and tonight's CYBILS nominee offering is BORN TO BE GIANTS, by Lita Judge (who started working on dinosaur digs for the Museum of Paleontology in Alberta, Canada, when she was only 15!). Oh, and in case you were wondering- dinosaurs and mammoths/mastodons were not alive at the same time- dinosaurs actually lived about thirty million years before dinosaurs. I learned that last night.

BORN TO BE GIANTS is a kind of continuum of dinosaur parenting styles. Which is something I never really thought about. I knew dinosaurs hatched from eggs, and just kind of assumed that parenting styles were similar to those of modern day reptiles. This is actually not the case at all. Or it is the case sometimes, but not all of the time.

Lita Judge begins with the Saltasaurus, a dinosaur who did, in fact, lay thousands of eggs on a sandy riverbank and then leave them. Judge points out that some dinosaurs, such as Saltasaurus or Argentinosaurus were so large that they really couldn't protect their babies-- they would probably step on them and crush them. Other dinosaurs, like tyrannosaurus rex, however, did stay at their nests. They couldn't sit on their eggs (again, too heavy!) but they did watch over them and guard them from predators. Judge then explains that smaller dinosaurs, such as oviraptors, did sit on their nests, and may also have cared for their young.

Dinosaurs such as the Maiasaura were next along "care continuum." Maiasaura are alricial, meaning the babies have to stay in the nest and taken care of until they grow stronger. Other dinosaurs (and birds like geese) are precocial. They can care for themselves and hunt for food at birth, but stay with the parents for protection. And then there were other dinosaurs like troodon, that grew up with the pack, so that they could learn hunting skills.

Judge's fact-filled text is accompanied by her own water-color (I think) illustrations. Appendices in the back include a timeline and brief paragraph about each featured dinosaur, a glossary, a bibliography, and an author's note about her experiences with dinosaurs.

I loved thinking about dinosaurs through this new and different lens. I also think this would be a great mentor text for helping kids think about how authors organize nonfiction information.
Posted by Carol at 9:43 PM