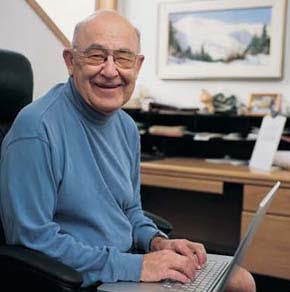 From 1991-1995, I attended the University of New Hampshire, where I had the enormous privilege of learning from Don Graves, Jane Hansen, and Tom Newkirk. Don is, without a doubt, the most significant teaching and writing mentor I have ever had. I have often joked that I was going to get a little plastic bracelet that said WWDGD?

About ten days ago, I got an email that Don had passed away. Over the past week or so, I have attempted to capture a little of who Don was to me, and some of the significant lessons I learned from him. I don't think this piece is done, and maybe I will rework it, but I'm afraid that if I don't post it now, I never will. So here are a few of the lessons I learned from Don…

• Be real.
I met Don Graves when I interviewed for the doctoral program at UNH. At that time, folks in UNH- Don Graves, Don Murray, Jane Hansen, and Tom Newkirk were doing some of the most important literacy work in the United States and I felt a little like Dorothy on her way to meet the Great and Powerful Wizard of Oz, as I slogged across campus dodging puddles in my high heels on that cold rainy late March day. First I met with Jane, then she took me down the hall. When Jane and I rounded the corner into Don’s office, I expected grandeur- maybe a heavy mahogany desk and oriental rug, certainly a secretary and a dark suit. Instead, we rounded a corner and were greeted by Don, who was sitting at a scratched wooden teacher desk, not unlike a million I have sat at during my career. He wore a plaid flannel shirt, levis, and tennis shoes, and was probably one of the most down to earth people I have ever met. When I got back to Denver, and people asked what Don was like, I replied, “He wore tennis shoes.”


• Stay close to your center.
Don was a famous man who did incredibly important work. He wrote more than twenty books. He traveled the world speaking about writing. He filled hotel ballrooms and mesmerized huge audiences at writing conferences for more than 25 years. Despite his popularity and fame, there was never any doubt about where Don was happiest and where he really wanted to be. And that was with Betty, always with Betty, his wife of more than fifty years. She was his best friend, his first reader, his travel companion, his anchor, the center of his universe. How I admired that relationship.


• Be true to your friends.
The Dons- Don Murray and Donald Graves were legends. But they were also best friends. They met at the Bagelry. They talked on the phone every single day. They responded each other’s writing. They walked through each other's dark times.


• Nulla dies sine linea.
Don began every day in his study. Books. Articles. One pagers. Keynotes. Sermons. Poems. Never a day without a line. This week, I’ve thought a lot about how far I have gotten from that in my own life.


• Be clear about your purpose.
Don was a practitioner, a pragmatist, a realist. When presented with an instructional innovation or practice, his first question was always,
“What’s it for?”That question, more than any other, has guided my practice for the past fifteen years.

• Teaching is about relationships.
If I had to describe Don in one sentence, I think I’d say, “Don understood the importance of relationships,” or maybe I’d say, “Every single person who knew Don believed they were important to him." If you asked me, I’d say I was one of Don’s favorite students. But I think JoAnn Portalupi would say the same thing. As would Cyrene Wells. Or Donna Qualley. Or any of the twenty other students who went through the doctoral program with me.

Don showed that he cared in so, so, so many ways. When my dad was diagnosed with terminal cancer the summer before I was scheduled to start my dissertation, and I flew home to be with my family, Don called every two or three days, just to check on me. I pretty much decided that I was going to stay home and not finish the doctoral program and then Don called to ask if he could be on my doctoral committee. He came out of retirement, and drove from Jackson two or three times that year to support my work.

It wasn't, however, just the people in his UNH world that he knew and cared for. At conferences, people regularly approached Don. "I don't know if you remember me…" they would start. He always did. He always knew their names. He knew where they lived. How many children they had. What they taught. What they had talked about the last time they had been together.

People, more than anything else, mattered to Don.

• Write with your students.
Don never asked students to do what he wouldn’t or couldn’t do himself. If we wrote a one pager, Don wrote a one pager. Many weeks, he started class by reading aloud his work. More than a decade later, Don and Penny Kittle wrote a book, INSIDE WRITING, about this topic. I suspect it was an easy book for Don to write because he drew on years and years and years of experience of writing with his students.

• Focus on strengths.
Don asked his graduate students to write one-page responses to reading (the dreaded UNH “one pager”) every single week. Like many students of my generation, I had endured many traumatic “red pen” writing experiences and am, at best, a reluctant writer. At first, Don (and Jane Hansen and Tom Newkirk’s) one pagers were tortuous experiences for me. Don read and responded to every one pager. His responses always addressed the content and thinking of the paper. He also usually included a line or two of comment about the craft. “You had such a powerful lead, Carol. I wonder how you might have circled around to that lead again in your conclusion” OR “I have never met anyone who can capture a child like you can. Be sure you include those vignettes in everything you write.” Knowing that I had strengths and tools I could use gave me the courage to step out and try other things.

Now fifteen years later, I hear Don’s voice every single time I sit down with a writer. “Respond to the message first, Carol. Find the strengths in the writing. Point out what’s good and ask the writer if they can do it again.” Aside from writing with and in front of kids, this is the most important tool I have for teaching kids (and adults) to write well.

• Students can accept big challenges as long as you place big safety nets below them.
In its earliest days and maybe even more so now, people have often said that writing workshop lacked rigor. That was not at all the way that Don intended it to be. His classes were tough, tough, tough. I remember, in particular, a class on research in writing. We had to select a topic, design a research study, carry it out, and then present the findings. My finished document was 75 pages. In January, when the semester began, the task appeared insurmountable. But Don broke it down. Spent two weeks helping us construct good questions. Had us repeat our questions over and over and over again. Spent another couple of weeks on how to gather research. Asked us to write one pagers about our findings almost every single week. The last week of class, we all marveled at how we had climbed Mount Everest. Don was not surprised. “Students can take on any challenge,” he said, “as long as you place big safety nets below them.”


• The person doing the talking is the person doing the learning.
People came to UNH to learn from Don Graves. Don knew a lot and could have easily filled our three hours graduate classes each week. But Don believed that people learn by talking to each other. And he lived that belief in his teaching. Don was prepared for classes, and he always did a little talking, but mostly he expected students to talk to and learn from each other. His classes were rich with conversation.

• Never stop learning.
o During my initial interview for the UNH program, I made a comment about Don having "completed" his work on the writing process. Don graciously informed me that that was not the case at all, that actually he had just begun. "The day I stop learning," he said, "will be the day I stop teaching." Don was a learner. Whether it be studying children's writing, or crafting poetry, or birding, or preparing to visit a new place with Betty, Don was a learner. He was always a learner.

Thank you for sharing. He touched me through you. I would not be the teacher i am without your words of wisdom, support etc. If you are a reluctant writer I'm not sure what that makes me.

A lovely tribute. It's amazing how much we learned, and will continue to learn, from Don's words and wisdom. You were so blessed to know him so well! I'm sticking a copy of your blog in one of my books so that when I read it, your words will be there to remind me of what a great teacher he was... and how his influence will continue!

Oh, my...How I have been wanting to talk to you and connect with you about Don. You have captured his legacies gloriously, Carol. He touched each and all of us so profoundly...and we are all so much richer for his light in our lives. I so know what you mean about Don's gift is making one feel heard and special. So many tributes about Don have included that very sentiment. Isn't that just the most incredible gift? I can see that little boy smile on Don's face as he read your words from heaven.

Thank you for opening your heart.

This is really wonderful. Thanks so much for sharing this wisdom. I am passing it on to the teachers I know. I am sorry for your loss and deeply grateful for the blessings you've shared.

I am printing this out and putting in my notebook to remind me. Lovely tribute.

Thank you for sharing this! It showed me the personal, human side of someone who was an anonymous figure to me. I loved how you showed the real, important things - not that the teaching of writing is not important- but how he was able to maintain his work by his personal relationships and interest in people.

Thank you, Carol, for this beautiful tribute to our friend. I nodded my head all along the way; your words captured him. Thank you for sharing this with the world! It was great to meet you in Denver.